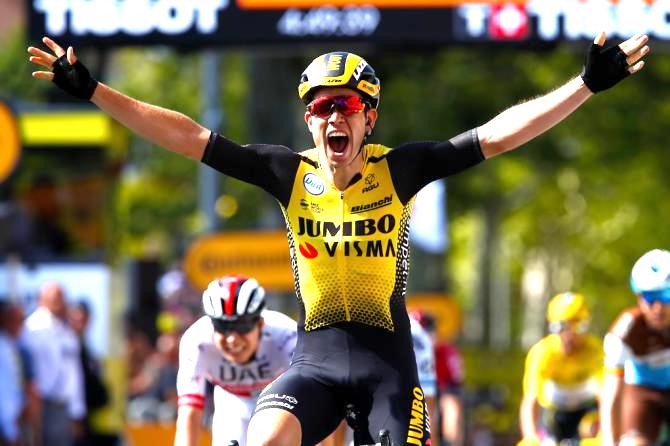 Yellow jersey wearer Alaphilippe launched the attack from 38km out, where narrow road and a crosswind created perfect conditions for the devastating attack.

Geraint Thomas and his powerful Ineos team leapt into the fray in what turned into a rampage all the way to the quaint Tarn town of Albi.

Alaphilippe leads second placed Thomas by 1min 12sec, a second Ineos rider, Egan Bernal, is at 1min 16sec, and van Aert’s teammate Steven Kruijswijk is another 11sec off in fourth.

Pinot, who started in third, dropped to 11th, 2min 33sec behind his countryman.

“We knew there was a chance of a split,” said Alaphilippe. “I have my ambitions, and we will defend this jersey every day.

Ineos boss Dave Brailsford said the stage went exactly as he had planned.

“I feel like we just scored a goal,” said Brailsford. “It’s really rare that you put that much time into so many top guys,” he said.

“This race is like no other, if you lose your attention you can end up losing major time, and that’s what happened to all those guys.”

“We saw the weather and spoke about this in the pre-race briefing,” said the Briton who has plotted six Tour de France victories from the last seven.

Nairo Quintana was all smiles too, after finishing in the mini-peloton after an exhausting long-range dash.

“I was fortunate to be aware of what was happening, I feel lucky in a way, that’s racing,” he said.

“That’s three stage wins for us so far,” said the 24-year-old multiple cyclo-cross world champion. “It was great for me and Stevie (Kruijswijk),” said van Aert, after he pipped Elia Viviani at the line.

“I came from the back with a really fast launch, I planned it that way because it’s the fastest way to finish.


The Tour reached its halfway point ahead of the first rest day Tuesday, before a flat run to Toulouse serves as a prelude to some major high-altitude racing.