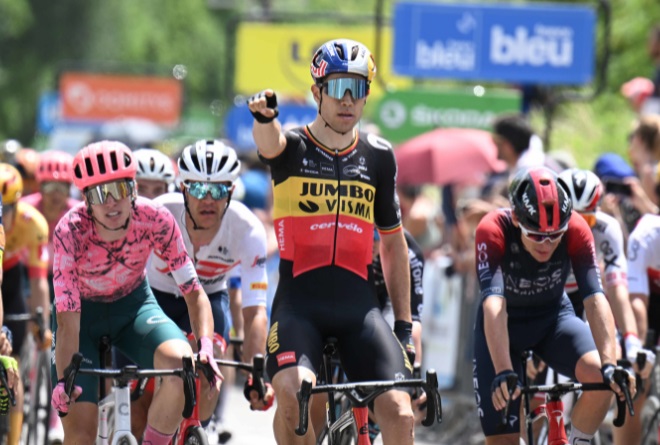 Wearing his Belgian champion tunic Van Aert beat Ethan Hayter and Sean Quinn in a bunch sprint to the line in bright sunshine after a showery day in the Ardeche region.

“If you look to the profile of the stage you could expect a hard final,” van Aert said.

“A lot of teams were interested in dropping a few sprinters. I could hang on and felt good for the sprint. It was really nice. On the climbs I felt quite comfortable, and a hard stage suits me when it’s like this but then in the spring there were guys like Hayter, and you have to beat them. He’s doing great this season, so it was tough to pass him, but in the end it happened so I’m happy.

The peloton managed to drop the sprint specialists such as Dylan Groenewegen and Phil Bauhaus 10km from home on this first of five hilly runs, with a time trial and three mountain stages also on the menu.

Van Aert picked up 10 bonus seconds for the win and will be wearing the overall leader’s yellow jersey on the 170km run from Saint Peray to Brives on Monday, along a route resembling the opener.