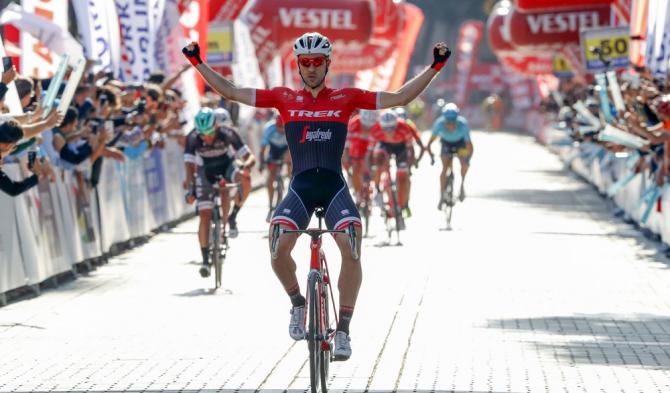 Edward Theuns ended his final race with Trek-Segafredo with a victory at the Tour of Turkey stage six Sunday, finally breaking through the stranglehold Sam Bennett (Bora-hansgrohe) has had on the bunched finishes.

The 144-kilometer final stage ended in an uphill battle where Theuns finally got the better of Bennett in a tricky, technical final kilometer after the Irish sprinter dove into the last corner with high-speed and crashed. Theuns avoided going down as well, recovered, and sprinted to the win.

Theuns explained: “We had a good gap, and it was nice from Sam Bennett that he wanted to take a pull also. Then he passed in the last corner, inside, and I felt he was going really too fast. He crashed right in front of me, I had to brake full, get out of my pedal, get into my pedal again, but then I could go to (Matteo) Pelucchi’s wheel and get the slipstream, and I had really a lot of power left in my legs.”

Diego Ulissi (UAE Team Emirates) had no problem defending the general classification leader jersey, clinching the first World Tour of his career. Ulissi has a 12″ second advantage on Jesper Hansen (2nd); and 24″ on Fausto Masnada (3rd).