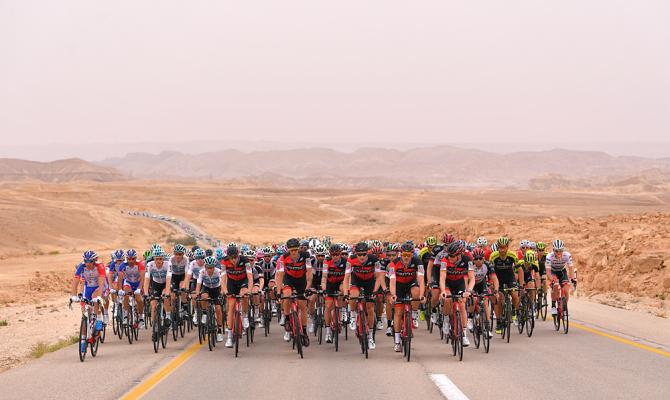 Tom Dumoulin (Team Sunweb) has finished in the bunch the third stage of the Giro d’Italia, protected by his teammates on a day that turned out to be more demanding than expected.

Rohan Dennis (BMC) retained the overall lead at the end of the 229-kilometre stage through the Negev Desert from Be’er Sheva today.

Dumoulin criticized Sunday’s wind-blasted finale at the end of a stage that was buffeted by strong desert winds and sand.

“That was the worst, most hazardous sprint I’ve ever done,” Dumoulin told reporters at the line. “It was really dangerous. I am glad I survived that one.”

“I am glad it’s over,” Dumoulin said. “The desert? Boring. The first day was OK in Jerusalem, and it’s nice because I won the time trial. But the past two days haven’t been so nice. It was too dangerous. It was not safe anywhere in the peloton.”

With the Giro’s “Big Start” in Israel complete, the race returns to Italy for the fourth stage between Catania and Caltagirone in Sicily on Tuesday. Monday is a rest day.