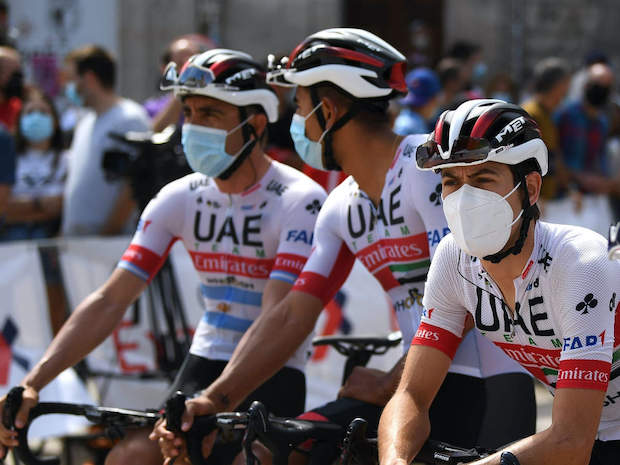 Sebastian Molano, Cristian Munoz and Camilo Ardila, all from UAE Team Emirates, were sent home from Vuelta a Burgos before the start of the second stage because a person they had been in contact has coronavirus.

However, the organisation of the Vuelta a Burgos has confirmed that the tests done to the three riders of UAE Team Emirates have had a negative result.

The riders were “isolated, sent home and will all undergo another test,” said the team in an early statement before the start of the stage.

“The tests done today as a prevention measure to three riders of UAE Team Emirates for being in contact with someone that had a positive result in a PCR test, were negative,” reads a statement.

“Following the health protocols established by the organisation of the Vuelta a Burgos and the UCI, the riders didn’t start in the stage in the morning and were immediately taken out of the race bubble as a preventive measure, until the results of the tests were known.”

The race had already suffered the withdrawals of Israel Start-Up Nation’s Itamar Einhorn and Alex Dowsett for being directly or indirectly in contact with Omer Goldstein, who received a positive result over the weekend.