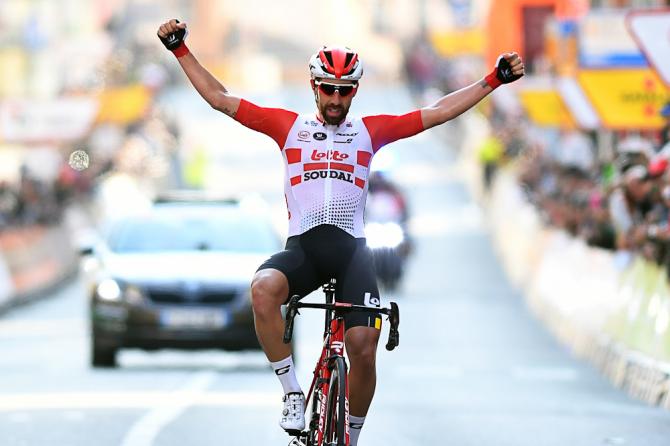 De Gendt finished a 164km route in 4hrs 14mins and 32sec as the only survivor of an early six man breakaway that began after 12km in a race that started and ended in the seaside town of Calella.

Maximilian Schachmann (Bora-hansgrohe) broke from the peloton with 5km or so remaining to finish second a couple of seconds ahead of the onrushing peloton as Grega Bole (Bahrain-Merida) came third.

With three category one climbs across the forested peaks behind Spain’s Costa Brava an elite group had been expected to drop a major part of the peloton, which it did.

“I was surprised the gap didn’t come down,” De Gendt said after the race. “I was at the limit of my endurance but when I was getting closer I just had to carry on.”

“This is the best race I’ve had here and it’s a joy to race in these circumstances.”

It was a quiet day for Chris Froome and his compatriots Simon and Adam Yates, all finished in the main group.

Tuesday’s second stage is a 166km-long day of racing which heads north along the coast from Mataro to Sant Feliu de Guixols.