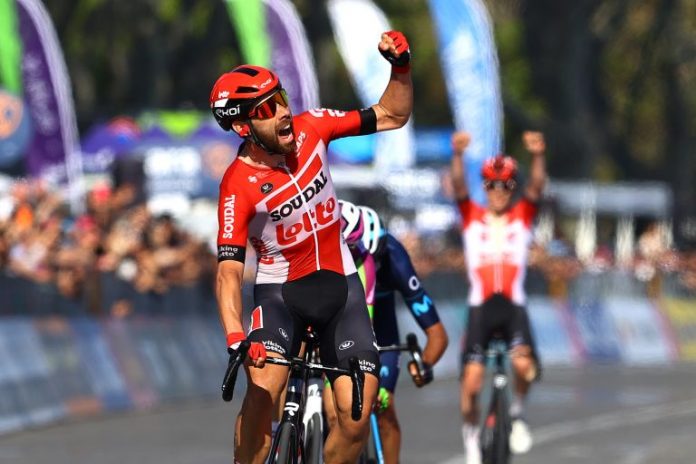 Thomas De Gendt rolled back the years with victory in the Giro d’Italia eighth stage around Naples on Saturday with Juan Pedro Lopez holding the race leader’s pink jersey.

A breakaway group of 20 runners formed 14km into the race with Mathieu van der Poel accelerating heading into the last 50 km to split the group.

But the Dutchman, closely watched by Biniam Girmay and the Mauro Schmid, had to let a counter-attack of Gabburo, De Gendt, Vanhoucke and Arcas develop a few moments later.

Under the impetus of De Gendt, the leading quartet maintained their lead until the final push on the finish line on the seafront in Naples. The Belgian pipped three break-away rivals Davide Gabburo, Jorge Arcas and compatriot Harm Vanhoucke after the 153km ride around the southern city of Naples.

The 35-year-old rider won a sprint finish ten years after his first Giro stage win on the Stelvio when he finished third overall in the race through Italy.

“With a group this big and really good guys like van der Poel, Ulissi, Girmay, we knew that they would all look at them. Mathieu…went really hard on the second to last lap. We got dropped…and made it back. We made an attack just to try. We knew everyone would look at van der Poel and Girmay to close the gap so we took a bit of an advantage and we hoped that we would make it over the steep climb and they wouldn’t catch us afterward but they stayed at 30 seconds,” said De Gendt.

“ I was working for Harm [Vanhoucke] so that he could attack on the climb but he said he didn’t have good legs…I said in the last 3 km to Harm, we ride full and…I’m sure I will win in the sprint.”

Lopez retains the lead he grabbed last Tuesday on Mount Etna. Sunday’s 191km ninth stage ends with a summit finish at 1,665m altitude on Blockhaus, in the Abruzzo region.