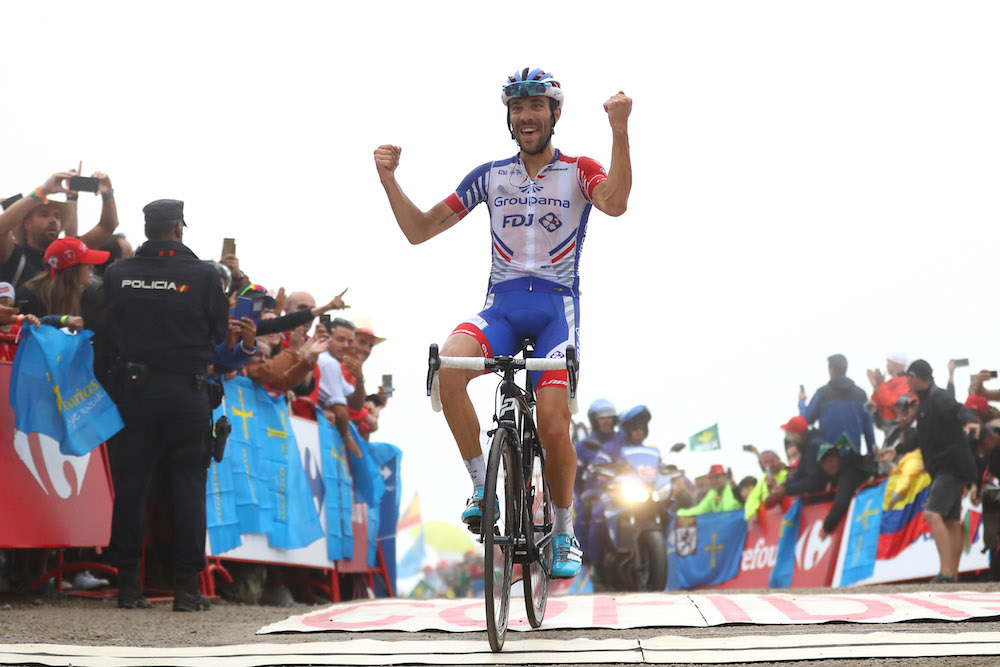 Thibaut Pinot (Groupama-FDJ) drew upon all his climbing credentials to win stage 15 at the Vuelta but as Simon Yates (Mitchelton-Scott) extended his overall lead by finishing third on Sunday.

Pinot came in 28 seconds ahead of Miguel Angel Lopez (Astana) and 30 in front of Yates to claim his first stage win at this event.

“I did a lot of damage,” Pinot said. “I knew that if I attacked they would not come after me and once I had fifteen seconds, with the shape I was in, I knew it was okay.

“For me it’s a beautiful victory. I had the obsession to win at the big three tours so it’s a victory that I will remember for the rest of my career.”

After already clinching one stage at the Giro d’Italia and two at the Tour de France, Pinot becomes the 18th active rider to have completed the set of wins at all three Grand Tours.

At the top of a fog-smothered Lagos de Covadonga, he punched the air as he crossed the line first, a reward for breaking away from the group of favourites with six kilometres left.

Yates, however, was not far behind and he now leads Alejandro Valverde by 26 seconds in the general classification and Nairo Quintana by 33, following a third consecutive summit finish.

“I’m always confident in my ability, today I had good legs again and I hope to continue like this,” Yates said. “There are many hard stages to come and the gaps are still small. I’m not exactly a level above anyone else. Everyone is still very close.”

The Briton had made a series of attacks on the 12.2km final climb and had to dig deep to snatch third, as the exhausted Quintana surrendered to Valverde, Steven Kruijswijk (LottoNL-Jumbo) and Enric Mas (Quick-Step Floors).

Lopez made a late push on Pinot with just over 2km to go but while it was enough to secure second, the Colombian failed to rein in his rival.

The Vuelta will take its second rest day on Monday, ahead of the individual time trial on Tuesday between Santillana del Mar and Torrelavega.