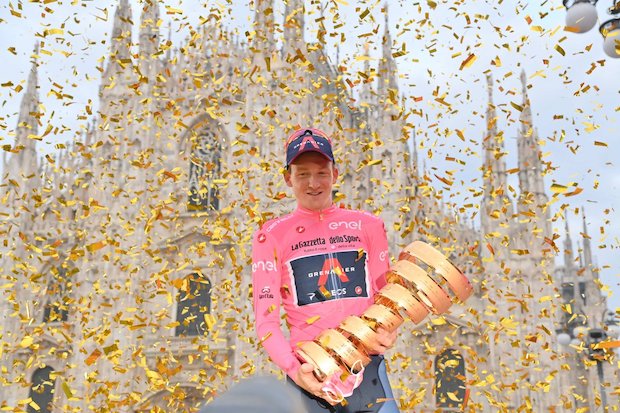 Tao Geoghegan Hart won the Giro d’Italia after beating Jai Hindley in the final-stage time trial on Sunday as Ineos-Grenadiers turned around a dismal season in spectacular fashion.

The 25-year-old started the day 0.86 seconds behind Hindley but he beat the Australian to win the race by 39 seconds and give Ineos-Grenadiers their second Giro title after Chris Froome’s 2018 triumph.

The race had been rescheduled from May 9-31 amid the COVID-19 crisis.

“It’s incredible. It was impossible for me to even think about winning the Giro when we started in Sicily,” said Geoghegan Hart, who was only his team’s plan B.

“All of my career I have dreamt of being top 10 or top five in a race like this. During the ITT (individual time trial) my DS (sports director) told me I was faster than Jai Hindley.

“When my DS told me not to take risks in the final part I understood I was close to the victory.”

Ganna, who won the race’s three individual time trials and a mountain stage, was in the hot seat to see his team mate ride to victory in Milan.

“I have won this ITT but I am even happier for my team mate Tao, it’s fantastic,” he said. “I knew he could do it. Now I look forward to celebrating today’s results with Tao.”

Geoghegan Hart’s victory came on the back of a largely disappointing Tour de France from Ineos-Grenadiers after defending champion Egan Bernal pulled out injured in the final week having previously dropped out of contention.

The Giro started in horrific fashion for the British outfit as leader Geraint Thomas pulled out after a crash early in the race, only for the team to win seven stages with Geoghegan Hart moving up the ranks until he snatched the overall lead on the last stage.