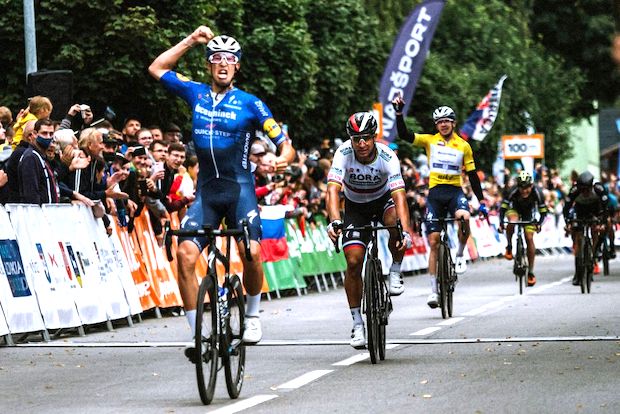 Jannick Steimle (Deceuninck-Quick-Step) won stage 2 of the 2021 Tour of Slovakia ahead of Peter Sagan (Bora-hansgrohe), and teammate Alvaro Hodeg.

On the final climb a flurry of attacks split the field into several groups, making things tough for the fast men. Winner of the general classification at the 2020 edition, Steimle quickly jumped from the field to counter one of these moves and with 12 kilometers to go he found himself at the front of the race together with Peter Sagan (Bora-hansgrohe). They were soon joined by eight more riders.

The catch was made 3 kilometers from the line and the peloton began preparing for a mass gallop, but their plans went up in smoke with 300 meters to go, when several riders slid out in a right-hand corner.

Steimle, who was the first man to enter the finishing straight, was among the few to avoid the incident and launched a mad rush to the line, which culminated with his first victory of the season.