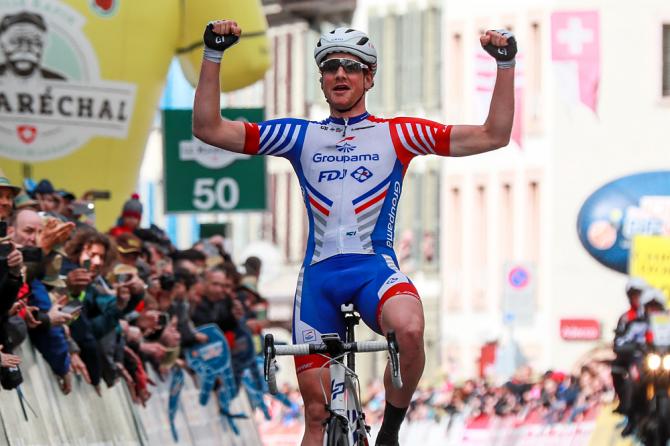 A powerful solo burst from Stefan Küng (Groupama-FDJ) clinched victory on stage 2 of the Tour of Romandie on Thursday after a 174.4km rolling run in misty rain from the foothills of the Jura to the edge of Lake Geneva.

When the 25-year-old time-trial specialist made his move, the peloton knew Küng had no chance of taking the overall lead.

The Swiss rider launched his surge from a mini break with 18km to race. He produced a sustained tempo all the way to the line.

Some 59 seconds after Kung raised his arms in victory, Sam Bennett (Bora-hansgrohe) edged Sonny Colbrelli (Bahrain-Merida) for second as the peloton went through in a bunch sprint.

“I had a look at the stage profiles and realised this was a good day for me,” Kung said. “I knew that if I had a minute with 20km to go, then I’d have a chance. Of course, you’ve got to get in the right break and then to be able to drop the other guys, have the legs and hold off the peloton, so it’s complicated. But I pulled it off and it’s a great win for me”.

This was Kung’s third career stage win on the Tour of Romandie and his second stage win of the season.

Primoz Roglic (Jumbo-Visma) finished with the pack and stayed in yellow.