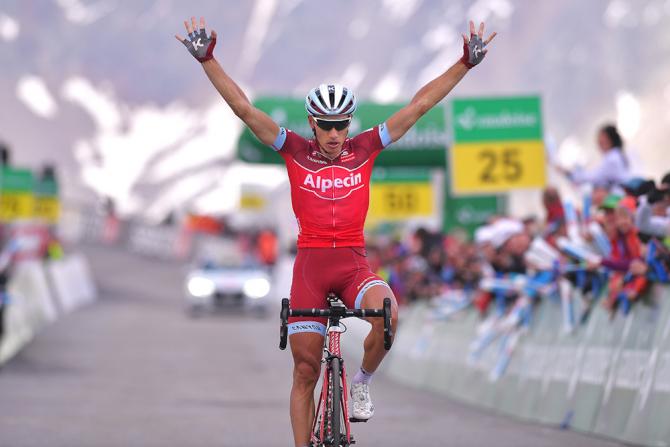 Simon Spilak (Katusha-Alpecin) climbed into the overall lead at Tour de Suisse Friday, winning stage 7 in the shadow of the Tiefenbachferner glacier in Solden, Austria.

Bahrain-Merida’s Ion Izagirre was second on the mountaintop finish. Joe Dombrowski (Cannondale-Drapac) was third after riding with Spilak on the first half of the finish climb.

“With 7-8k to go, I dropped Rein [Taaramae] and Joe Dombrowski,” Spilak said. “Maybe that was too far from the finish, but what else could I do? I had to take the jersey for my team.”

Domenico Pozzovivo lost his overall lead, finishing 12th on the 166.3km day. The Italian was dropped early on the final climb to 2,780 meters when Spilak put his Katusha-Alpecin teammate Rein Taaramae on the front to drive the tempo.

Eventually, it was only the Katusha-Alpecin duo and Dombrowski. Taaramae peeled off about 10 kilometers from the finish. A couple kilometers later, Spilak accelerated and Dombrowski could not follow.

Spilak gradually built his lead on the steady climb through the barren, rocky terrain. “Immediately from the start this morning I felt that I had good legs,” he added. “Yesterday it was 30 degrees, but today it was 20 and this is better for me. We had a plan for today and the team was so good. Not to perform well was not an option.”