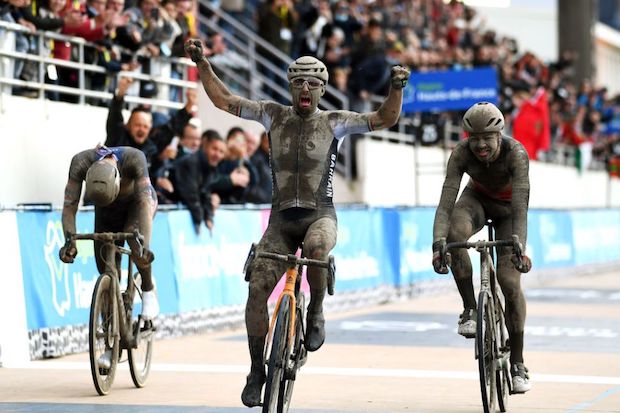 Sonny Colbrelli became the first Italian to win the Paris-Roubaix in 22 years when he prevailed on his debut in a three-man sprint finish at the end of a gruelling race on Sunday.

You can rewatch 2021 Paris-Roubaix HERE

His whole body caked in mud after 257.7 kilometres featuring 30 cobbled sectors, Colbrelli burst into tears as he collapsed on the grass of the Roubaix Velodrome after triumphing in the first rain-hit edition of the Hell of the North since 2002.

Van der Poel came up just short after doing most of the work in a small group chasing Gianni Moscon, who seemed to be heading to victory before a puncture and late crash ruined his chances.

Moscon (Ineos-Grenadiers) eventually finished fourth, 44 seconds off the pace, leaving his compatriot Colbrelli to become the first Italian to win here since Andrea Taffi in 1999.

“Today is a legendary Roubaix with the rain and the weather at the start and an attack with 90km to go after Arenberg,” said Colbrelli.

“I followed only Van der Poel in the finale and in the end I had a super sprint. I was at the limit in the finale. It was super difficult because I had to pay attention for the crashes from the first sectors and then there’s always the stress to be in position on the cobbles. This year is my year, I’m very happy.”