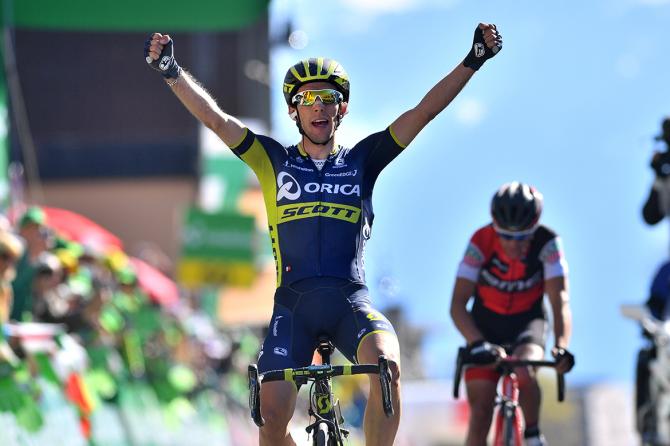 The young Brit attacked with 15kilometres to go and was able to get away in a small group ahead of the final first category climb of the day.

On the steep slopes up to the finish line, the race shattered to pieces as Richie Porte bridged across to Yates’ group and the duo rode away into the final three kilometres.

Yates waited patiently before blasting around Porte in the closing metres to take the second stage victory of the tour for Orica-Scott.

“On the final climb I knew Richie was coming across, so I didn’t want to keep pushing as I knew that when he caught me I would be empty, so I took a bit easy and waited for him to get to me,” Yates explained.

“I managed to get him in front into the final kilometre and I think that really saved me as the wind was quite strong in the finish. I am just really happy that I was able to come around him and take the victory.”

Fabio Felline of Italy fell to fourth overall, 44 seconds back, after holding the lead since Tuesday.

Chris Froome (Team Sky) dropped from the main group five kilometres from the finish and lost more than one minute to Yates.