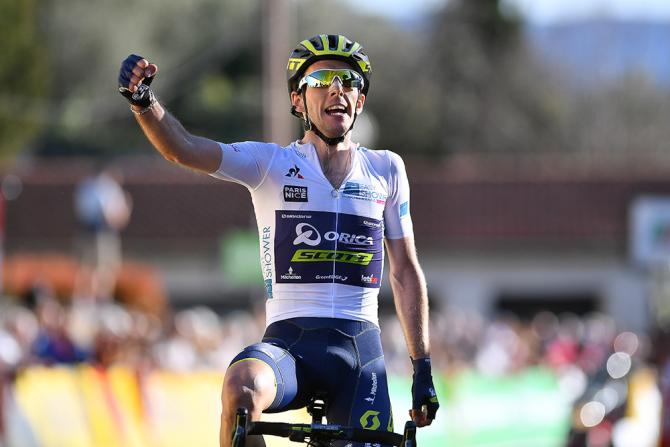 Simon Yates (Orica-Scott) soloed to the stage 6 win in Paris-Nice with a gusty attack in the last kilometers. The Briton crossed the finish line 17 seconds before Sergio Henao (Team Sky) and 26 seconds ahead of Richie Porte (BMC).

The stage started with a tough first hour of racing with many riders attacking in an attempt to establish an early breakaway as the peloton split significantly over the first climb of the day.

Nobody was given any freedom to break free and it was after approximately 50kilometres of racing that a breakaway formed at the head of the race.

Eight riders worked together and rode out to a maximum advantage of four minutes as the broken peloton behind all regrouped.

After 140kilometres of racing the riders began to ascend the Col de Bourigaille for the first time, swallowing up six of the breakaway riders, leaving only two riders, Eduardo Sepulveda (Fortuneo – Vital Concept) and Alessandro de Marchi (BMC) out front.

Team Sky set the initial pace at the front of the reduced bunch on the final ascent of the 8.1kilometre category one climb and the catch was finally made.

With the front of the race all back together Simon Yates showed his climbing class with a powerful attack and quickly rode away, constantly increasing his advantage.

On the steep decent his lead continued to grow out to 50seconds as he began the final climb to the summit finish in Fayence, a 1.3kilometre ascent with a 9.8% average gradient.

“I was still quite far down in the general classification before today so I had some freedom,” explained Yates at the finish. “I expected some guys to come with me and work together for the finish but I found myself on my own. I was just full gas to the finish, I gave everything I had.

“There’s still a lot of time to take away from Julian Alaphillipe (Quick-Step Floors) but he’s such a phenomenal rider. He’s one of the best riders of our generation.”

With the stage victory today, Yates jumps up in the general classification to eighth place, one minute 37seconds a drift, but with two hard stages still to come he expressed his motivation to continue for a good placing overall.

“I’ll try again but there’s a long way to go,” Yates continued. “Today I told myself that if I want to feature in the overall, I have to take some time somewhere.”

“There are still a few difficult days still to come and I can try. La Couillole looks very difficult, I don’t know this climb but I saw the profile. There are still a lot of guys down in the GC so I expect a tough race.” 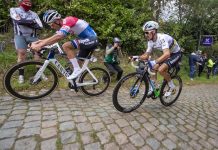