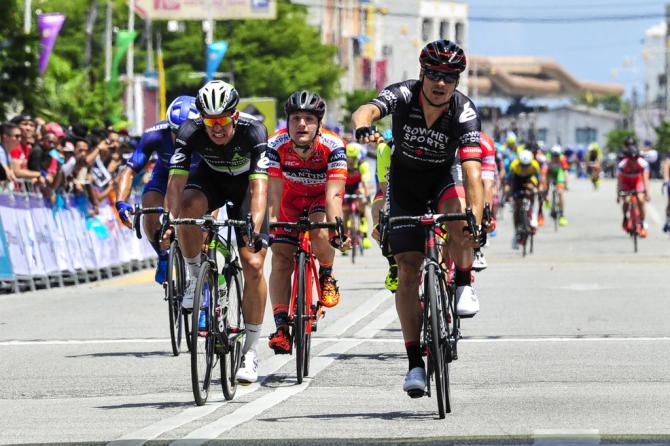 It was a crash marred finale within ten kilometers to go in Kuala Terengganu once Loh Sea Keong was the last man to be reined in. He was earlier accompanied in a 10-man breakaway by Nur Amirul Fakhruddin Mazuki who delivered for hosting team Terengganu TSG as he brought the first King of the Mountains red jersey home.

“Getting the win and the yellow jersey for IsoWhey Sport Swisswellness on our debut here sets up the team for a good Tour and hopefully I’ll get one more stage victory”, Sunderland declared at the post race press conference. “It was a pretty chaotic finale but the team got me ride in a pretty good position. The crash was close to where I was so I was lucky to get through that and be able to finish off the job with the sprint. Such a win gives you the confidence that you can win another stage. That would be fantastic but it’s already amazing to be here in the lead. I’ll try to hold on to the yellow jersey as long as I can, it’s an amazing event.”

Stage 2 will be the longest of the 22nd Le Tour de Langkawi, 208km, and also a hard one from Jerteh to Grik where the race last held a stage finish with eventual Tour de France yellow jersey wearer Rinaldo Nocentini won two years after cycling legend Gianni Bugno.

Wout Van Aert: I raced the way I like to race