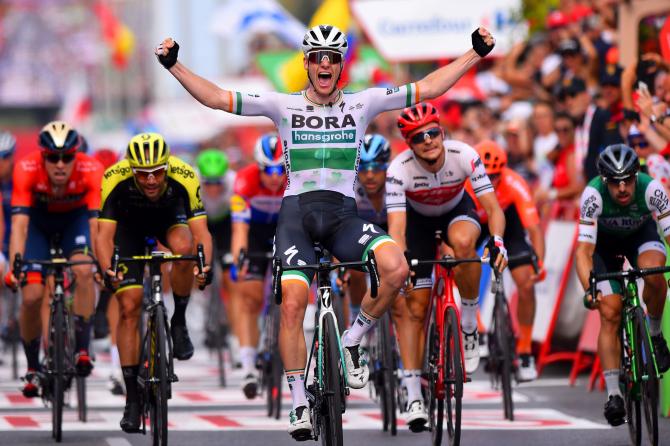 Sam Bennett won the third stage of the Vuelta a Espana on Monday as the Bora-hansgrohe rider sprinted to a convincing victory in Alicante.

Bennett claimed his fourth grand tour stage win, and his first at the Vuelta. He crossed the line ahead of Belgium’s Edward Theuns (Trek-Segafredo), who came second, and Slovenian Luka Mezgec (Mitchelton-Scott) in third.

“I felt so bad yesterday, I can’t tell you how bad my legs were in the stage,” Bennett said afterwards. “The team got me in the right place at the right time. If it wasn’t for the team effort today I definitely wouldn’t have got it.

“I went with momentum to the left, got on Trek and I knew it was a really fast final and kicked first. I think Trek waited a little bit too long.

“I’m delighted to get it. It means a lot to take a Grand Tour stage victory, especially in the Irish national champion’s jersey.”

The fourth stage on Tuesday will include an 175.5km-route between Cullera and El Puig. Its flat finish should again favour the sprinters before a more mountainous stage five on Wednesday.