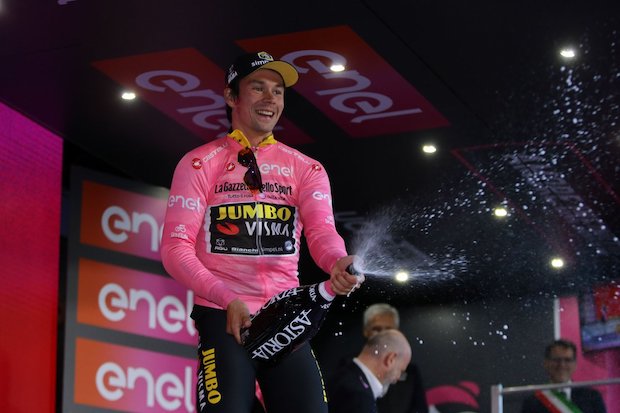 Primoz Roglic won the first stage of the Giro d’Italia on Saturday, pulling on the leader’s pink jersey after an eight kilometre individual time-trial in Bologna.

The Jumbo-Visma rider finished 19 seconds ahead of Simon Yates (Mitchelton-Scott) in a race with an uphill finish to the Sanctuary of the Madonna di San Luca, overlooking Bologna in northeast Italy.

Vincenzo Nibali (Bahrain-Merida) was third fastest at 23 seconds with Tom Dumoulin (Team Sunweb), the 2017 champion, just behind at 28 seconds along with Miguel Angel Lopez (Astana).

Mikel Landa (Movistar) trailed more than a minute behind his rivals.

“I tried to be focused. I did the recon some hours before the start. It’s not so big [on] tactics here – it’s not very technical, it’s quite honest, and at the end of the course, it’s full gas on the climb.

“It’s a nice gap and you always want more and more, but a win is a win. The first day is behind us and it’s a really nice start.”

Roglic opted to start in the first hour with the threat of bad weather looming with only Yates sticking with tradition and going off among the favourites later.

The weather remained dry even if the wind got stronger as the hours went by.

Roglic took the advantage on the flat around Bologna, to build up an 11-second lead on Dumoulin at intermediate stage. He continued to widen the gap on the climb up to San Luca, over 2.1km with a 9.7 percent gradient.

For the 29-year-old Slovenian, a former ski jumper, it was the 30th victory of his career, and eighth in a time trial.

This season, he won the three stage races the UAE Tour, Tirreno-Adriatico and Tour de Romandie, as he warmed up for his second appearance in the three-week Italian race.

Sunday’s second stage covers 205km between Bologna and Fucecchio, finishing in the Tuscany hills, which should benefit a breakaway.