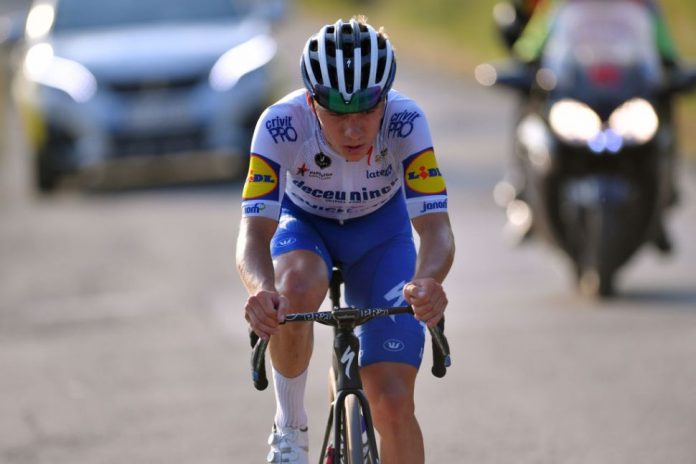 Remco Evenepoel took an emotional victory, which he dedicated to Fabio Jakobsen, after attacking with 51 kilometers to go in the queen stage of Tour de Pologne.

The young Belgian was in a league of his own Saturday afternoon, launching an astonishing long-range attack and ruthlessly blowing the race apart, before crossing the finish line while holding up the race number of Fabio Jakobsen, who sustained several serious injuries on the opening day of the event.

A course that gave little respite, featuring a succession of climbs stacked between Bukovina Resort and Bukowina Tatrzanska, promised a real showdown between the overall contenders, who were separated by just a few seconds at the start of the 152.9km stage. In the past, the winner emerged on the final ascent, but Evenepoel had other plans this time and stormed away with 51 kilometers remaining, which proved to be the key move of the stage.

What were 20 seconds after just two kilometers nudged out to a full minute with 40 kilometers to go, and despite a series of attacks from behind and a concerted effort of several teams, that was the last time the yellow jersey group saw the young Belgian until the finish.

In full time trial mode, Evenepoel continued to increase his gap to almost two minutes, easing up only with 200 meters to go, when he held aloft the number 75, the dossard of Fabio Jakobsen at the Tour de Pologne, in a touching tribute he brought to his teammate.

“Today was my day. We had a plan to attack a bit later, but I saw that 50 kilometres to go was the moment: everybody was suffering because yesterday was a really hard race. Everybody believed in me and that gave me confidence”, Evenepoel said.