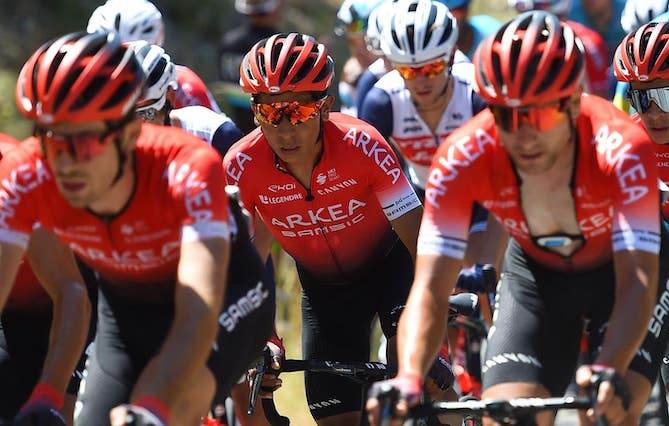 Nairo Quintana said Thursday he will not race in the Vuelta a Espana, following his disqualification from the Tour de France for taking tramadol.

Quintana said he did not have “the head or the body for competition” after being stripped Wednesday of his sixth-place Tour finish for taking tramadol. The pain medication has been on a list of International Cycling Union (UCI) prohibited substances since 2019.

“I prefer to go home, organise and prepare my defence for the news that reached me yesterday,” Quintana, the 2016 Vuelta champion, said in a video posted on his Instagram account.

Quintana implied that he will appeal his Tour disqualification and has denied taking tramadol.

Having “been able to reflect during the night”, the Arkea-Samsic rider felt he was not “in the right conditions” to take part in the Vuelta.

“So, during the next 10 days, I’m going to work to prove that I don’t have a problem, and I hope we’ll see each other in the upcoming competitions.”

The UCI announced Wednesday Quintana had been “sanctioned for an infringement of the in-competition ban on using tramadol”.

Traces of the synthetic opioid were found in two dried blood samples provided by Quintana on July 8 and 13 during the Tour, the UCI said.

As a first-time offender, he was not banned from further competition and had been free to compete in the Vuelta, which starts on Friday with three stages in the Netherlands.

Arkea-Samsic said they were aware of the decision but would “make no further comment”.

On Tuesday, the French outfit announced Quintana had signed a contract extension until 2025.