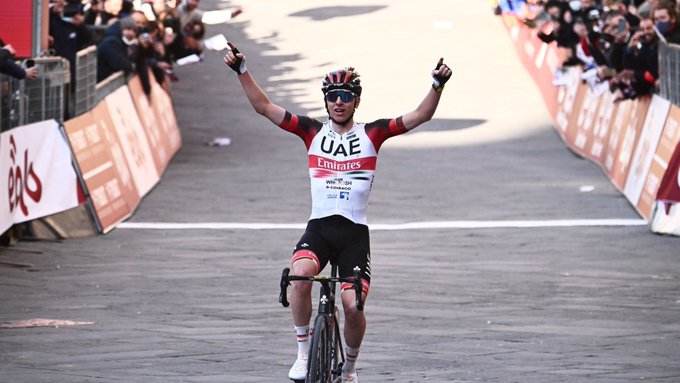 Tadej Pogacar won the Strade Bianche on Saturday with a long-range solo attack on the gravel roads of Tuscany.

The Tour de France champion made his move 50 kilometres from the Sienna finish line on a wind-swept day, finishing 37 seconds ahead of Alejandro Valverde.

His win came in cold, blustery conditions which caused a spectacular crash around halfway through the race, on the white gravel roads of the Crete Senesi.

Julian Alaphilippe was the high-profile rider worst hit by the crash, flying over his handlebars and onto his back before rolling off the the road and into a field as the swirling wind whipped up dust through the open roads of the central Tuscan route and pushed riders off balance.

Around 30 riders were affected by the crash including Jumbo-Visma’s Tiesj Benoot, the 2018 winner’s forfeit a huge blow for his team who were without 2020 champion Wout van Aert who decided to take part in Paris-Nice instead.

However, Alaphilippe got back onto his bike and attempted to catch up with the lead group, who by that time had the peloton hot on their heels. Alaphilippe joined up with the main peloton with 75km remaining and little more than a minute between them and a breakaway group.

The breakaway was caught with 52km to go on the gruelling Monte Santa Maria climb made harder by the wind. That didn’t stop Pogacar making his move shortly afterwards, slowly stretching his lead on the peloton to a minute and a half over the next 20km.

He hit the Colle Pinzuto sector, around 20km from the finish, with a lead of around a minute over a four-man chasing group lead by Valverde. By the time Pogacar hit the outskirts of Siena, Valverde and Kasper Asgreen had managed to cut the gap to just 50 seconds.