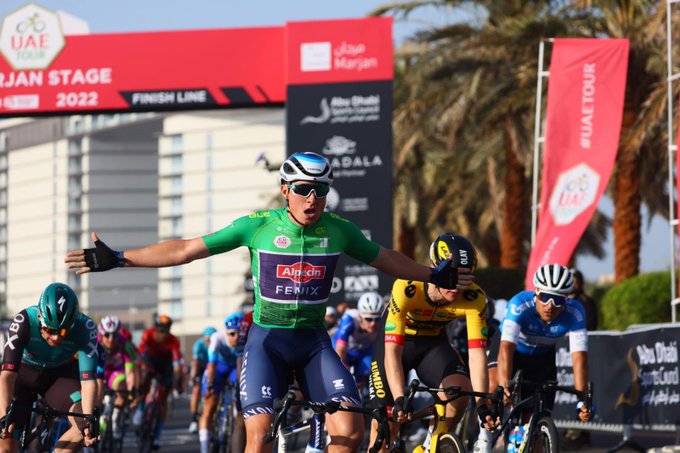 Jasper Philipsen recorded his second victory in this year’s UAE Tour in a sprint on Thursday, leaving the leader’s jersey on the shoulders of Tadej Pogacar.

The Belgian was again fastest to the line as the 182-kilometre stage ended in a chaotic bunch finish at Al Marjan Island, in the emirate of Ras al-Khaimah. Philipsen edged 20-year-old Olav Kooij of Jumbo-Visma and Sam Bennett.

“It was a really fast finish,” said Philipsen. “My lead-out man’s chain came off in the last kilometre, so it was chaos trying to find a good wheel. It all came out well in the end though.”

Pogacar collected a two-second bonus during the stage to double his lead over Filippo Ganna.

“I saw the opportunity to take some seconds in the intermediate sprint and took it,” said the Slovenian. “I had a puncture today but I didn’t panic, it happens sometimes,” he said. “The team was perfect and I was not stressed.”

On Friday, the sixth and penultimate stage is again likely to end in a sprint after a 180-kilometre ride round Dubai.