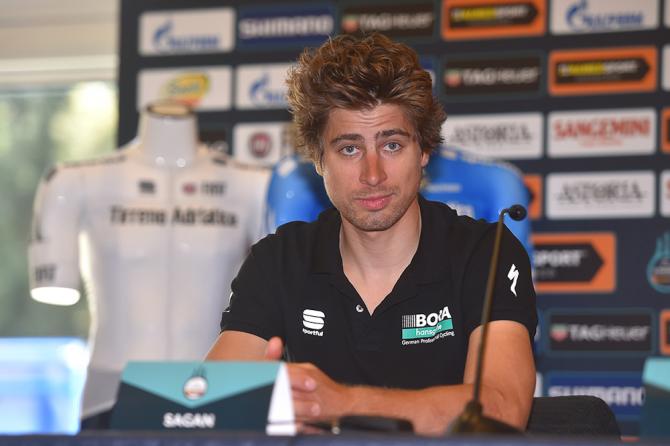 Peter Sagan will bid to finally win the Milan-San Remo at the eighth attempt on Saturday.

The Milan-San Remo is the longest one-day race in the calendar covering 291km, and this year a video review system could prove useful as dangers lurk for the 175 riders with weather conditions uncertain as rain is forecast.

“For Sagan every year can be the one,” said Elia Viviani, who is among the favourites after five wins this season.

The race starts in front of Milan’s Sforza Castle and ends on the Via Roma in San Remo on the Italian Riviera around seven hours later.

Kwiatkowski is also in form this year coming off his win in the Tirreno-Adriatico, where Sagan finished second on three stages.

“Who knows what will happen,” said Sagan, who has finished in the top four in San Remo four times. “I’m in good form. I finished well on the Tirreno, but there are so many rivals.”

Kwiatkowski will be hoping to become the first rider since Erik Zabel in 2001 to successfully defend the title.

Alexander Kristoff, winner in 2014, is among the contenders, along with France’s Arnaud Demare, who tasted success in 2016.

“I’d say it was one of my greatest moments,” said Demare. “It was a real mental trigger for me.

“I’m here with great ambitions to win but also more pressure as there is a lot more focus on me.”

Australian Simon Gerrans, however, was forced to withdraw on the eve of the race because of illness.