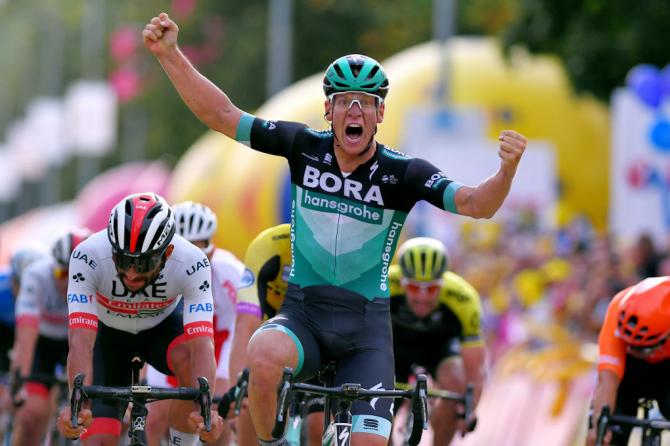 Pascal Ackermann (Bora–hansgrohe) prevailed in the sprint to win the first stage in the Tour of Poland, surging past Fernando Gaviria (UAE-Team Emirates) in the closing stretch

This victory has earned Ackermann the first yellow jersey as leader in the 2019 edition of the Tour de Pologne, as well as the white jersey as best sprinter.

This is Ackermann’s third career victory in Poland, his seventh in the 2019 season, with highlights that include two stages in the Giro d’Italia and the ciclamino jersey as best sprinter in the Corsa Rosa.

Mark Cavendish (Dimension Data) was brought down in a crash in the final 5km, though was able to ride to the finish. The Manxman got back on his bike, seemingly unscathed, but would not contest the bunch sprint.

“The game here in Krakow was over the top, I think it’s great for me to be the winner and also the finish was amazing for me and I think… I already did it last year and I knew how to race here. I spoke with my lead-out man Rudy Selig and I said to him we have to stay really calm and I’d say we did perfect today. Now the pressure is on; we’ve won one stage and now we’ll try to continue like this,” said Pascal Ackermann.