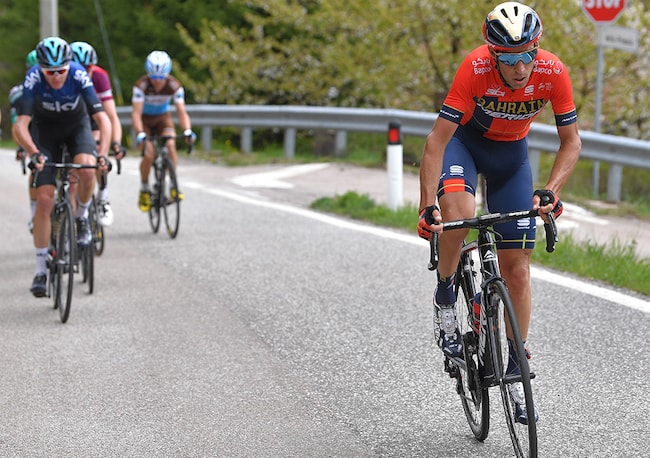 Tour of the Alps and Liege-Bastogne-Liege’s results are signs that Vincenzo Nibali is rounding into top form at exactly the perfect moment ahead of Giro d’Italia.

The Sicilian launched multiple attacks over the mountains in the Tour of the Alps and during Liege-Bastogne-Liege, Nibali attacked into the first chase group, eventually finishing eighth place overall.

“He’s never been in such good condition before the start of a three-week race – two weeks before – so it’s great,” Bahrain-Merida general manager Brent Copeland said.

“With a finish like that, neither one of them [Nibali and teammate Dylan Teuns] are really sprinters. So we knew that, if it finished in a small group, it would be difficult to get a podium spot. But, Vincenzo’s condition is a good sign for the Giro, and I think his condition is getting better and better as we get closer to the race, which is the most important thing for us. We’re pleased with the way that Liège went. It could have been better”

“It was more of a test because he hasn’t ridden a race this long since Milan-San Remo, so it was a question mark for himself about where he was sitting with his condition,” said Copeland.

“It was a good test and showed his condition is good, even after the Tour of the Alps, where he finished third, but that’s a race made up of stages that are all around 120-150 kilometres, so it’s shorter. We’re pleased with the way it went.”