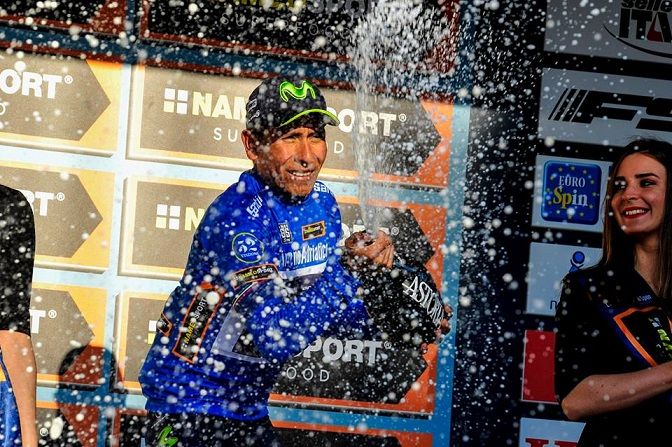 Nairo Quintana held on to his lead in Tirreno-Adriatico on Tuesday after the closing stage’s 10 kilometre race against the clock to finish 25 seconds clear of Rohan Dennis (BMC), the winner of the time trial, in the general classification.

Rohan Dennis won the race against the clock with a time of 11.18 followed by Jos Van Emden (LottoNL-Jumbo) and Michael Hepburn (Orica-Scott) in third.

“It has been a very good week for both myself and the team”, said Dennis. “To start off with a win and then hold onto the leader’s jersey for three days was great. I am really happy that I was able to take the win today and move into second overall on the GC. The work the team did for me over the whole week was incredible. Today’s victory really shows that all of the guys’ faith in me was worth it.”

Nairo Quintana had no troubles to cover the 10km individual time trial and seal his second overall triumph in Tirreno-Adriatico, two years after claiming his first ‘trident’ in 2015 with a similar procedure as for the last week of racing: leaving his rivals behind into the Terminillo climb and holding them off into the TT showdown.

“I’m really happy with this victory”, said Quintana. “Tirreno-Adriatico is a really beautiful race, one that I really like, and conquering it again makes me proud, for all the effort I put here and especially my Movistar Team, which supported me all the way to this time trial. I knew I had to go strong today, I couldn’t let the specialists put too much of a gap over me. Yet, I was calm and confident that I could secure the victory with the advantage I held. With all rivals we had to face and such a tough course, it’s a really prestigious victory to take. It’s a tribute to all those supporting me and my team-mates, for the help they offered me all week.