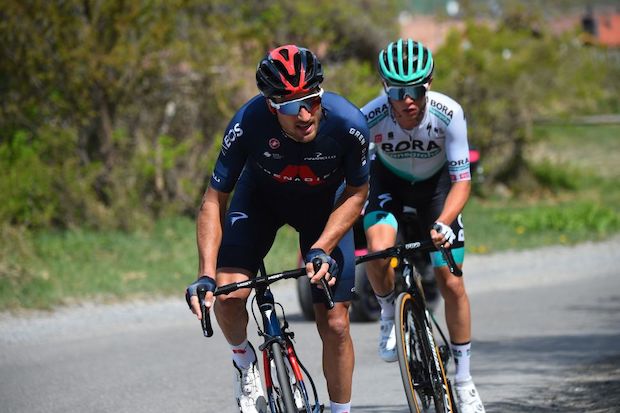 Gianni Moscon grabbed his second stage win in three days on the Tour of the Alps on Wednesday as Simon Yates held the overall race lead with two days remaining.

Moscon crossed the line just ahead of Felix Grossschartner after the 162km third stage between Imst in Austria and Naturno in Italy.

The 27-year-old held on after an impressive breakaway to follow on from his solo triumph in stage one at Innsbruck.

Four riders broke away from the main pack with 22km to go and Moscon ended the stage ahead of Grossschartner, with Michael Storer  third.

“On Monday I broke the ice in Innsbruck, now I have regained my confidence and feeling with victory,” said Moscon. “Dreaming of a hat-trick in my Trentino might seem too much right now.

“Tomorrow we have a hard and important stage, and we are ready to stand by Pavel Sivakov, hoping that hoping that his fall will leave no significant aftermath.”

Defending champion Sivakov fell mid-stage but the Russian climber managed to rejoin the peloton and is second overall, 45 seconds behind Yates.

“Today we were able to control the race, the team did a great job, and I was able to save some energy for tomorrow,” said Yates.

The key stage will be Thursday’s fourth, which is also the longest, over 168.6km from Naturno, with a 10km ascent seven kilometres before the finish line at Pieve di Bono.