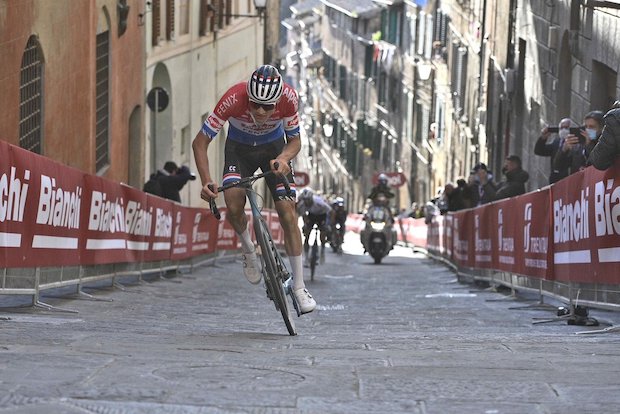 Mathieu van der Poel won the Strade Bianche after he pulled ahead on the Via Santa Caterina climb with 740 metres to go to cross the line first ahead of Julian Alaphilippe and Egan Bernal.

“Strade is one of the races I really wanted to win, and it’s really cool to win it today,” Can der Poel said. “I felt really good, I launched an attack at the last gravel section, and I came with Bernal and Alaphilippe in the lead and we did a pretty strong ride with the three of us.

“I felt I had something left in the legs to go all out on the last climb. It’s amazing to finish it off this way.”

The race featured 63 kilometres of gravel roads divided in 11 sectors. There were several attacks during the first part of the race until one first group was created by riders like Rudy Molard, Loïc Vliegen, Tosh Van Der Sande and Tom Bohli, among others.

Behind them a group that included names like Jakob Fuglsang (Astana-Premier Tech), Tim Wellens (Lotto Soudal) and Pello Bilbao (Bahrain Victorious), tried to reach the front but they didn’t make it.

With around 20 kilometres to go, Van Aert and Pidcock lost terrain to the rest of the group and started chasing while Trek-Segafredo’s Quinn Simmons crashed in a curve.

On the last climb, in Siena, the Dutch national champion made an impressive acceleration that left his Alaphilippe and Bernal without response.