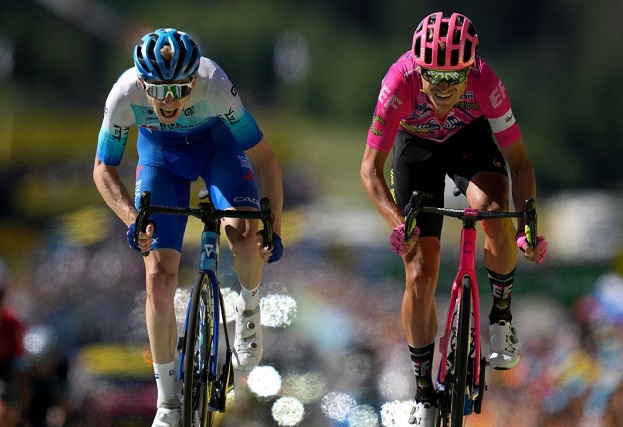 Magnus Cort won the 10th stage of the Tour de France, a 148.5-km Alpine trek from Morzine, amid a climate activists’ interruption on Tuesday.

You can rewatch STAGE 10 HERE

The race was stopped for about 10 minutes after half a dozen climate activists tried to block the riders 36 kilometres from the finish. They were pulled off the road by police and a senior race organiser before the race resumed.

Cort prevailed in a nail-biting sprint finish from the day’s breakaway to claim his second career stage win on the Tour after 2018. Nick Schultz took second and Luis Leon Sanchez was third.

“It is unbelievable. I can’t believe what just happened today,” Cort said. “This is huge. For me, my type of rider, it can’t be any bigger than this. This is what I can do, chasing stages in stage races, and the Tour de France is just the biggest race. In my first Tour I won a stage. I have been here a few times without, but every year really wanting and trying. It is unbelievable to do it again.

“When we entered the runway and I could see that things were coming back together, I looked up. There was a podium in the corner and I saw the sign of the Tour de France. I told myself ‘this one is mine.’ I just had to take it, no matter the price.”

Tadej Pogacar, who has lost two team mates after they left the race following positive COVID-19 tests since the start in Denmark, retained the overall leader’s yellow jersey.

Wednesday’s 11th stage is a brutal 151.7-km mountain trek from Albertville to the Col du Granon.