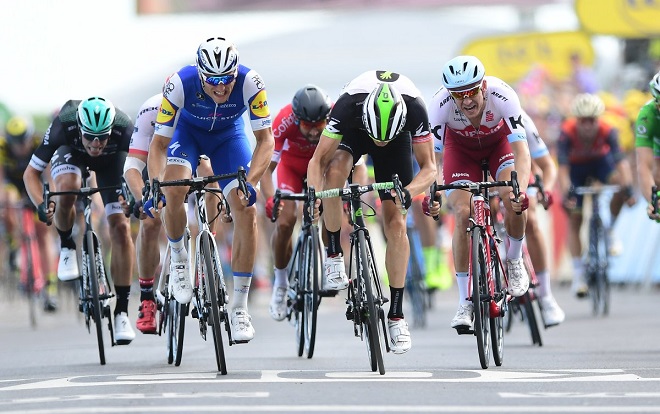 Marcel Kittel won the seventh stage of the Tour de France. The final sprint was very tight and the German got the win by millimeters over Edvald Boasson Hagen (Dimension Data).

Kittel was declared the victor ahead of Boasson Hagen by just six millimetres and joins Erik Zabel as the German rider with most stage wins on the Tour (12).

“It’s nice to be now one stage win shy of the record. I’m enjoying every single victory. I just concentrate on my job. It’s just cycling that makes me happy,” said Kittel.

Kittel also snatched the green jersey for the points classification from Arnaud Demare (FDJ) after the French champion, who had been ill overnight, was not a factor in the sprint. Kittel has 197 points to Demare’s 182.

“It is the closest win of my career. What a difference six millimetres can make between a big joy and a big disappointment,” said Kittel. “I focus on the green jersey. These victories bring me big points. I’m happy that I managed to throw my bike just the right way.”