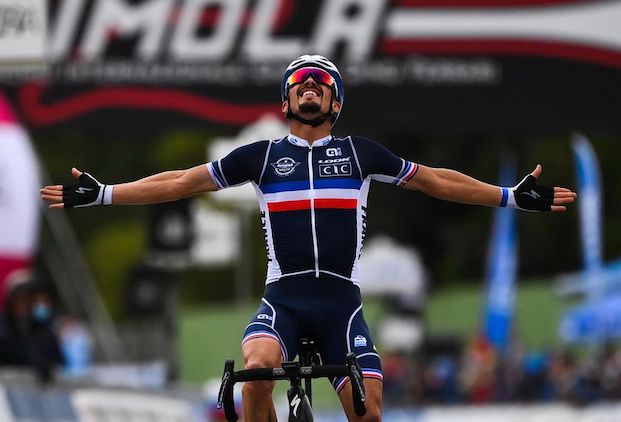 Julian Alaphilippe won the men’s road race at the Road World Championships on Sunday, becoming France’s first holder of that rainbow jersey since 1997.

Alaphilippe had time to punch the air before raising his arms above his head as he crossed the finish line on Imola’s auto racing circuit.

Belgian rider Wout van Aert won a sprint for second, 24 seconds behind Alaphilippe, with Marc Hirschi of Switzerland third at the end of the tough course.

The final race of the Worlds featured a total of 5,000 meters climbing in 258.2 kilometers. Nine laps of a circuit started and finished on the city’s auto racing track.

“For this moment it’s really hard to say something,” Alaphilippe said in a post-race interview. “I want to say thank you to all my teammates who really believe in me today. Everybody did a great job. It was a dream of my career. Sometimes, I was so close, and I was never on the podium. I came here with a lot of ambition and it’s just a dream day for me.”