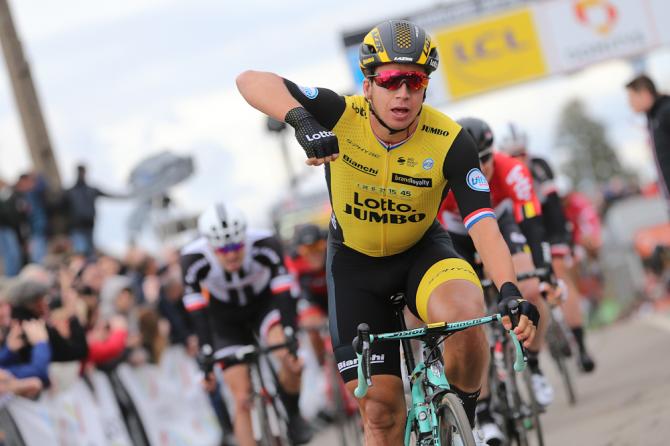 Dylan Groenewegen (LottoNL-Jumbo) has won the second stage in the Tour of Slovenia in Rogaska Slatina, crossing the finish line ahead of Matteo Pelucchi and Caleb Ewan.

The stage over 152.2 kilometres from Maribor to Rogaska Slatina evolved in a traditional way with an early breakaway. Ewan  had another crash on the day after suffering one in the first stage but the Australian could go back on the bike and returned to the peloton with the help of his teammates.

In the final sprint, Dylan Groenewegen was too strong and took the stage victory.

Ben Hill (Ljubljana Gusto Xaurum) moved into the overall lead after the stage after he was involved in the breakaway and picked up bonus seconds to contribute to his top overall placing.

“Once again it was a very hectic final. The pace was very high. The team did a great job today, but in the last kilometre we lost each other. As a result, I had to go on my own way instead and initiate my sprint early”, Groenewegen said.

“I’m very happy with this victory. This is good for me and also good for the team regarding the build-up to the Tour de France. Yesterday, I couldn’t sprint because of that massive crash, and today I had to set something straight. There are a number of top sprinters here whom I beat, which certainly gives me a lot of confidence“.