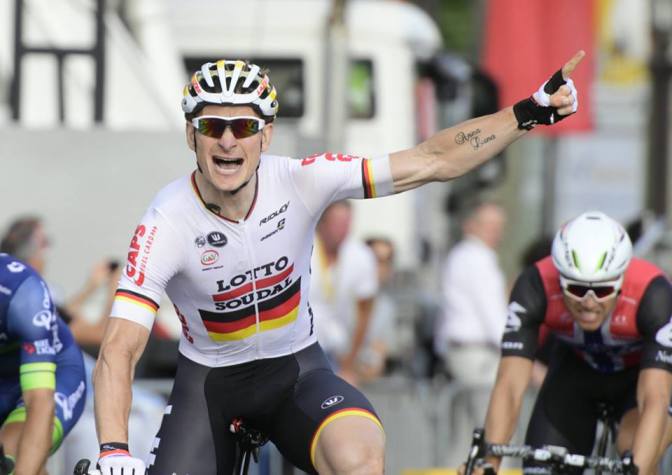 Four riders got in a breakaway which had up to six minutes advantage. Before the finale began João Matias was dropped. Ryan Mullen, Dion Smith and Taco van der Hoorn were left in front. They decided not to give up and it was a difficult task for the sprint teams to catch them.

The teams had to give all they got to catch the escapees in time. The sprint was very close and the photo finish had to confirm that German champion André Greipel had won the stage. He beat John Degenkolb and Dylan Groenewegen.

“It was a cat and mouse game between the break and the bunch. In the last 70 kilometres it was really à bloc. Frederik Frison and Jelle Wallays where riding at the head of the bunch for us, chasing down the leaders”, said Greipel.

“It was really close, but we caught them in the end. The escapees were strong, but so were our riders and those of the other sprint teams. Jens Debusschere had crashed so we had to change our plan. Nikolas Maes took me, Tiesj Benoot, Tony Gallopin and Jürgen Roelandts to the front. Jürgen led me to the wheel of Arnaud Démare in the last kilometre. I lost some positions when Richeze took Gavria to the front. I did a long and fast sprint and was lucky to get the wheel of Degenkolb. I beat him on the line. It was a nice sprint to watch I think. I knew that I won. It was close, but as sprinters we are dealing a lot with centimetres. This was a nice victory! The Alto do Malhão, where tomorrow’s stage finishes, is steep and tough. Tiesj and Tony can definitely gain positions on GC.”