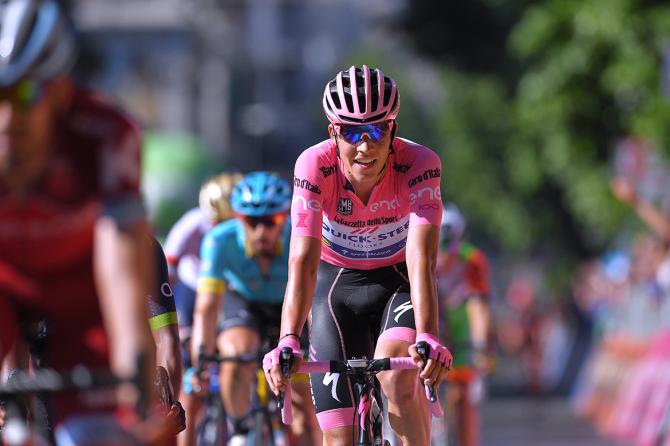 “I’m happy with two victories, the legs are now responding the way we wanted. This victory isn’t just for me, it’s for my team and my family and everyone that supported me. My family is here and it’s beautiful to give them this gift. The whole team worked perfectly. We were able to take the win here, now we’ll leave the islands and head to the mainland and we’ll see what happens.

“I’m pretty happy with my sprint today – it’s probably the best one I’ve done in my career. I’ve finally managed to do a sprint at the Giro d’Italia. I managed to get through the hilly first part of the stage pretty well. Then Zhupa lead me in the final kilometre and dropped me off with the sprinters.

It was tricky because of the headwind. Gaviria managed to get the jump and I just had way too much to do to catch him. I got second and that’s still a pretty good result.

“Yeah I am so happy with this result after being sick. The team did a fantastic job and led me out perfectly. Also, Rudi did an awesome leadout, he gave everything for me today. After being ill, I am so happy the team trusts me and this gives me so much confidence.”

“Today, only two guys went up the road so, normally, that would mean that the stage was quite easy. However, the pace was really on all day long and at the end, both the GC riders and the sprinters wanted to be up there at the front. It was definitely not an easy stage. My job today was to sit on Kristian’s [Sbaragli] wheel and then go as early as possible to open up the door for him. I did that but then, in the last 100 meters, I paid the price for that effort. Once again, we were good as a team, always up there, but still not quite where we want to be”.

“It was a really tough day, I was a little bit unlucky in the beginning and punctured almost straight away and it cost me some energy to come back from that. Then with 50 kilometres to go I had to change my bike which also wasn’t great, but Simon helped me and could position both me and Tom well. In the final I was sprinting for third place, then I was blocked a little bit and couldn’t move back up. After a pretty tough day with some bad luck I am pleased with that result.”

“At 20k to go Giaco said he was not feeling good, so I had my chance,” explained Stuyven. “I was feeling pretty good today, so I was happy I got the chance. But then it’s really hard to fight for that wheel of course, and the last part was headwind.

“I think I was [in good position], but then had to wait a little bit for the sprint. Then when Gaviria went, also some guys came from the left and went full to the right, and I was boxed in. I don’t feel like I really sprinted, I continued, but could not do a full sprint.”

“It was a dangerous and crazy final to be honest. I’m super happy that Fernando took the victory, but it cost me a lot of nerves here in Messina. It was amazing to see so many people on the streets, but it’s also sometimes very dangerous because people want to take the pictures and selfies and whatever, and they come closer and closer to the road. When there’s a bunch coming of 200 people it’s dangerous, but that’s cycling.

I will try to keep the maglia rosa at least until Sunday. I think Sunday is an important day for the climbers on Blockhhaus, and we’ll see what happens there.”