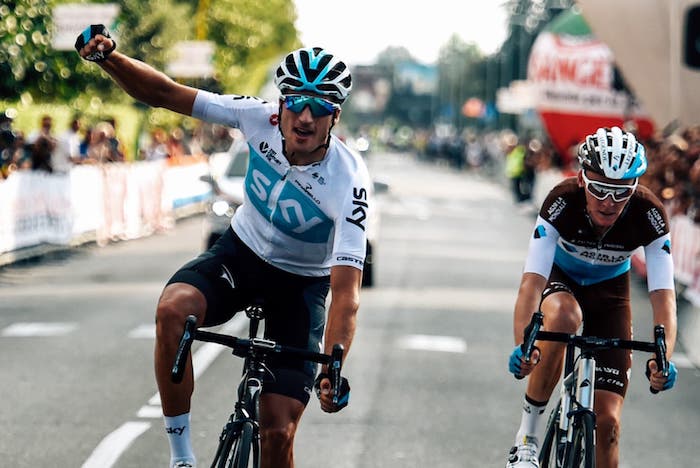 Gianni Moscon (Team Sky) claimed a second victory in a week with an impressive ride at the Giro della Toscana.

The Italian was able to out-sprint Romain Bardet (AG2R La Mondiale) in Pontadera after arriving at the finish in a three-man group alongside Domenico Pozzovivo (Bahrain Merida).

Eddie Dunbar covered an early attack before Kenny Elissonde set about splintering the peloton on the rough ramps. Dunbar then took over and blew the group apart, riding clear with Moscon on his wheel, with the pair joined by Bardet and Pozzovivo.

Moscon accelerated towards the summit and the trio forged on to the finish. The Italian was able to shut down a late attack from Pozzovivo and held his nerve in the final kilometre, with a strong sprint enough to hold off Bardet.

“I’ve worked and trained really hard during the last five weeks. To be able to come back like this is really nice and makes all the hard work worthwhile. The shape is really good and I hope to keep this shape up to the World Championships. Even after that there are still a lot of races and the season is still long.

“In both races the team have done a really good job. The young guys have surprised me as they are super strong. Everyone is doing their job, going deep and there is a big commitment from everyone. Today Ethan pulled the whole day, right from the beginning. It was a hard day for him and everyone did a great job. Also a special mention for Eddie – he did an impressive job on the last climb setting the tempo. The biggest part of this win is for the guys.”

He added: “These wins are really good for the morale and they give me confidence. In the World Championships everyone is at the maximum level. But I feel ready and you never know, with a bit of luck anything can happen.”