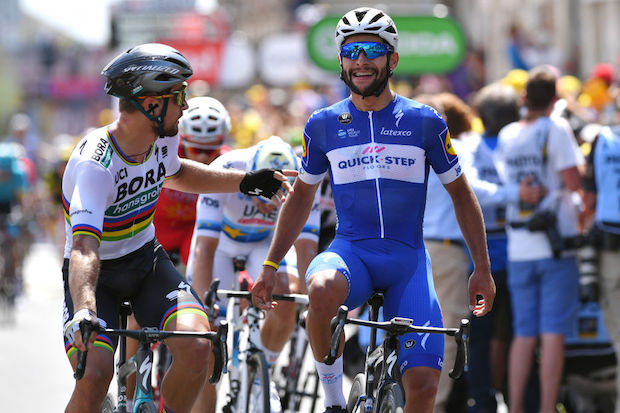 The Colombian didn’t waste any time in leaving an indelible mark over the 105th Tour de France, as he produced a perfect sprint on the uphill drag to Fontenay-la-Comte to win the opening stage of the race and don the first yellow jersey.

Chris Froome (Team Sky) crashed into a grass section on the side of the road with five kilometers left and was quickly back on his bike, but the speeding peloton did not wait as preparations for the final mass sprint had started. Nairo Quintana (Movistar) suffered a flat just outside the 3km to go banner, while Richie Porte and Adam Yates were also caught out and finished in the Froome group.

Gaviria was left thrilled after his impressive stage win on his very first Tour de France, after outlasting world champion Sagan in a long struggle down an 800m home straight with Kittel, who won four stages on the 2017 Tour, leaving his bid too late and coming third.

“I just said to myself ‘go’ and had the legs luckily,” Gaviria said. “What an amazing day, nobody is happier than me. The team did amazing. Tomorrow I’ll be in yellow and try and keep it as long as possible.”

“I don’t know about keeping the yellow jersey because of the mountains, but I plan to fight for the green jersey (sprint points) all the way to Paris.”