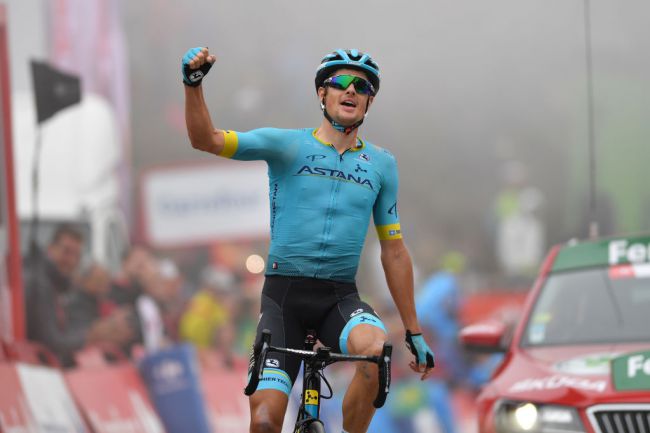 Jakob Fuglsang soloed to a summit-finish win on stage 16 of the Vuelta a Espana on Monday as Primoz Roglic extended his advantage at the top of the overall standings.

Fuglsang broke away late on the final climb into the thick clouds at 1,600m altitude in northern Spain.

Tao Geoghegan Hart of Ineos came close for a second straight day, digging in to finish second on the third stage in the spectacular Cantabrian Mountains.

Protecting a sizeable overall lead, Roglic ended up stretching his advantage by 23 seconds over his closest challenger Alejandro Valverde to 2min 48sec with just five stages to go.

The former ski-jumper took advantage of a last-climb struggle for the best young rider’s white jersey between Miguel Angel Lopez and Tadej Pogacar who are also fourth and third in the overall standings.

Lopez launched a series of aggressive assaults, with Pogacar stoically sticking to his wheel. Roglic did likewise as the 39-year-old Valverde eventually wilted as the race rose into the cloud-line and the temperatures plunged.

“I pulled a few seconds back, and that’s a good thing,” said Lopez.

“It looks very equal between us all, in terms of who has the most energy,” said world champion Valverde, who remains second. “I won 40 seconds yesterday and lost 20 today. On a stage like that, 20 seconds is nothing.”