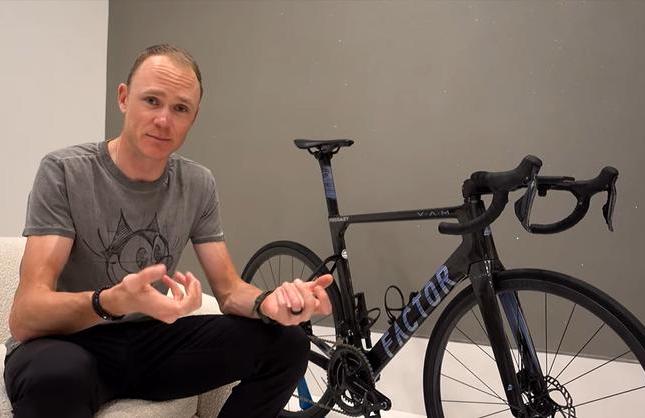 After his transfer to Israel Start-Up Nation, Chris Froome switched to Factor Bikes and disc brakes. In a video, the four-time Tour de France winner unveiled the features of his new bike: the FAM Ostro VAM.

While talking enthusiastically about his bike, aerodynamics with good balance, Froome, on the other hand, made no secret of his doubts about his new brakes.

“I’m not 100 per cent sold on them yet, myself,” Froome said. “I’ve been using them for the last couple of months and, performance-wise, they’re great. You always stop when you need to stop. In the dry, in the wet, they do the job. They do what they’re meant to do.

“The downside to disc brakes: the constant rubbing, the potential for mechanicals, the overheating, the discs becoming a bit warped when on descents longer than five or 10 minutes of constant braking.

“Personally, I don’t think the technology is quite where it needs to be yet for road cycling,” Froome continued.

“I accept that’s the direction the industry wants to go,” Froome said. “We bike riders are going to have to adapt and learn to use them.

“If you’re not on disc brakes already, it’s only a matter of time before you’re made obsolete and forced onto them.”