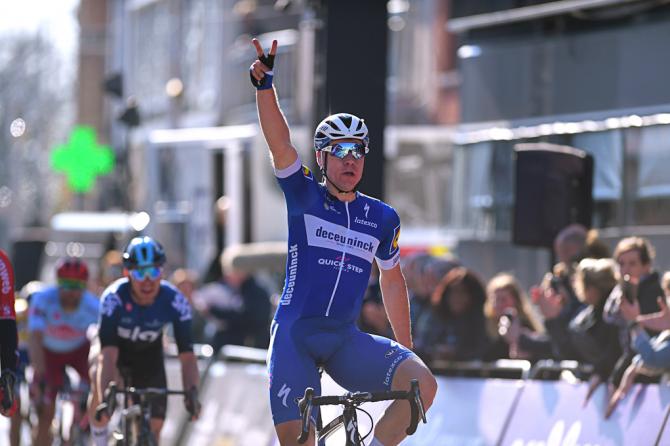 Fabio Jakobsen capitalised on his teammates’ lead-out in the final kilometer of Scheldeprijs to deliver a fine sprint inside 200 meters to go, holding off the challenge of Max Walscheid (Team Sunweb) and Chris Lawless (Team Sky) for his second consecutive triumph at the Belgian race.

“To be on the winners’ list here with two triumphs makes me very happy! The guys did an amazing job from the start, for which I am extremely grateful. I knew that I had a strong sprint in my legs and riding with bib number one on the back gave me a lot of confidence, and at the end of the day I am glad I could repay my team for their hard work”.

Flanders’ oldest race started again from the Netherlands and that spelled chaos minutes after the peloton got underway from Terneuzen, with the crosswinds shattering the bunch to three distinct groups, a strong Deceuninck – Quick-Step contingent being part of what soon became the main field with more than 150 kilometers to go.

Some riders managed to come back, but things remained quiet for just a brief moment, echelons splitting the peloton and making for a hectic race until the riders entered in Belgium for the final 60 kilometers.

Before leaving the Netherlands behind, several riders were involved in a crash, Fabio Jakobsen being among those to hit the deck. He escaped almost unscathed and after a fast bike change he made it back to the peloton.

The two riders who animated the second part of the race were easily brought to heel by the reduced bunch, before another crash – this time with less than 20 kilometers to go – took other riders out of contention.

Michael Morkov was in charge of putting Fabio Jakobsen in a good position ahead of the final metres, which he did perfectly and allowed the Dutchman to launch a strong sprint that couldn’t be matched.