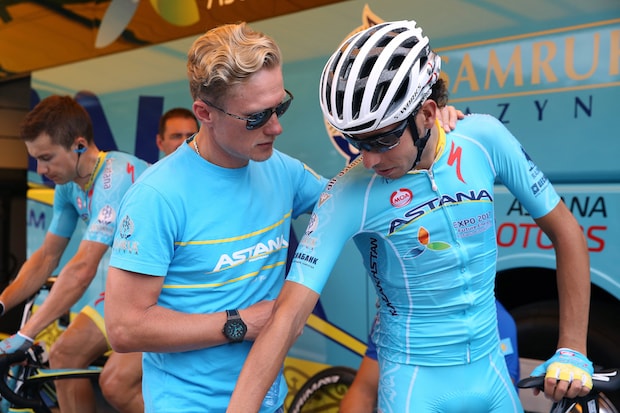 It seems that Fabio Aru will skip the 2018 Tour de France to ride the Giro d’Italia and the Vuelta a España before the World Championships.

UAE Team Emirates team’s recent acquisition has won the first mountain finish at this year’s Tour de France to wear the yellow jersey for two days. However, La Gazzetta Dello Sport claims that Aru has chosen for 2018 a path that has been successful for him in the past.

“I can’t say if I’ll ride the Giro… For sure I’ll do the Tour of Abu Dhabi but I don’t know if that’ll be my season debut,” Aru said.

“I’ll also ride Tirreno-Adriatico, while there’s some doubts between Milan-San Remo and the Volta a Catalunya. The Tour of the Alps is important because a stage will be on the World Championships course, which is a big goal. I’d also like to make my debut at Liège-Bastogne-Liège. The Vuelta is a must considering the Worlds.”

“Astana helped me make my dream of being a professional come true. I’ve learnt a lot and I’m grateful to the team. However, it’s time to make a change, to experience something new,” Aru said.

“I’m really sorry [about Vinokourov’s legal threats]. He’s been a rider but hasn’t understood my desire and needs.

“After two podiums at the Giro d’Italia, my victory at the Vuelta a España and my fifth place at the Tour de France, my dimension as a rider has changed. The expectations are higher at my new team but so is my motivation.”