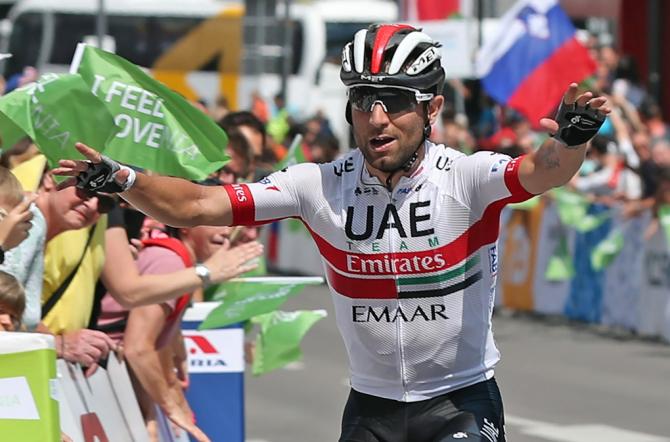 Diego Ulissi (UAE Team Emirates) won the third stage of Tour of Slovenia on Friday, also taking the overall lead two stages before the end of the race. Ullissi crossed the finish line 12 seconds ahead of Aleksandr Vlasov (Gazprom-Rusvelo).

Giovanni Visconti (Neri Sottoli – Selle Italia) was the third to cross the finish line of the 170-kilometre stage from Žalec to Idrija, while Tadej Pogačar (UAE Team Emirates) was the best Slovenian, taking fifth place today and sixth overall.

Ulissi escaped Vlasov two kilometres before the finish after the pair had broken away from the main group in the last climb of the stage. On the descend, they gained a 20-second advantage over the main group.

“I’m really happy with this win because the condition was there and I showed it in the past few days,” said Ulissi. “I wanted to win and I got it. I’ve ridden with a lot of determination in these first three stages. My escape companion Vlasov was also very strong. Then in the final the group behind were approaching and, having seen that the Russian was a little tired, I tried to go away by myself. It went well”.

“Pogačar and I talked to each other on the climb, I felt good so we decided that I’d make the move and he’d block in the group behind.”

“Now I’m in the lead and we will do everything to try to keep it, even if the efforts of the Giro d’Italia are starting to be felt a bit”.