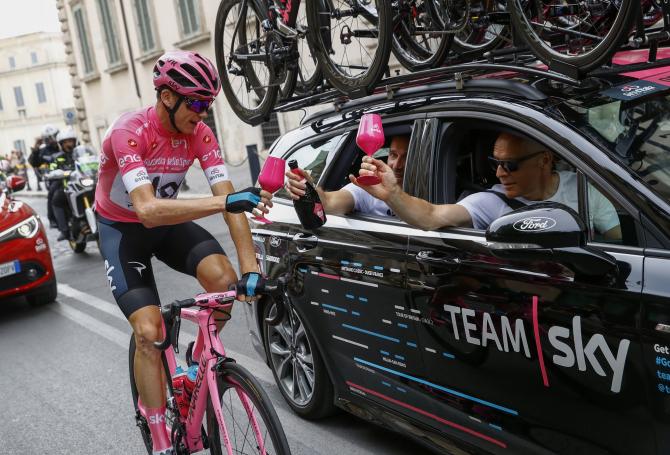 “I think it’s probably the best performance of his career. We all know that those exceptional adventures in sport – they don’t always come off. There are very few people who put it all on the line and try something like that, and rarely does it come off, but when it does it’s epic. I think that’s what we saw here”, said Brailsford.

“He’s experienced, he’s calmer than he was when he was younger. He knew he was biding his time while everyone was writing him off. He was having a tough time let’s not deny that, but the calmness, experience and the confidence that he was going to come good, I think was the thing that decided the race.

With Froome also firmly focused on defending his Tour de France title in July, Brailsford added that a bid to do the double in 2018 meant a different approach to the Giro.

“We came into the start and he wasn’t 100 percent on form. The idea was to come in and grow through the race and try to gain form through the race. Of course the crash in Jerusalem really scuppered that plan to start with as he was spending more time recovering from the crash than he was actually recovering and recouping what he was doing from a physical point of view. So we were a bit worried about the trajectory, but I think when it came to the real moment there are a couple of lessons.

“Maintaining that focus: as when times are tough it’s easy for the group to split and people to start pointing the finger at each other. He’s a brilliant leader Chris Froome and he pulled everyone together. Everybody said, ‘let’s stay focused, let’s stay on it and let’s not deviate from what we are trying to achieve.’ And I think that’s something to look back and learn on. Ultimately he and the team had the confidence. He’d been to the final week before, and these races it’s not the first week or the second week – it’s the last couple of days and who can really absorb that fatigue. That’s why there are a couple of riders who are a step above the rest.”