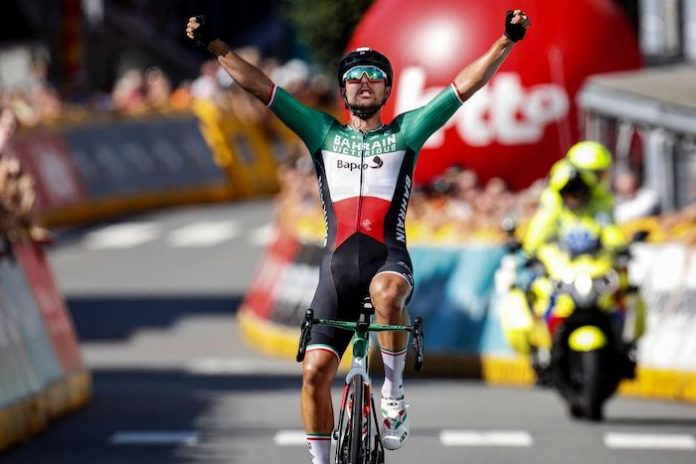 Sonny Colbrelli escaped from an elite breakaway through the Ardennes to win the sixth stage of the Benelux Tour and take the overall lead.

You can rewatch STAGE 6 of 2021 Benelux Tour HERE

Colbrelli surged away from the breakaway with more than 25km to go, just ahead of the ‘Golden Kilometre’ which includes three sprint lines, mopping up nine bonus seconds. He collected another bonus when he came in first in Houffalize, crossing the line 42 seconds ahead of his Bahrain Victorious team-mate Matej Mohoric.

“It was maybe the toughest stage of the career,” Colbrelli said at the finish, “it was maybe like the ones in the Tour de France, today was so difficult. Something I’ve never really done before. I think it will be another tough stage tomorrow and I’m going to try to recover, attack it again, hold the jersey and go full gas.”

The victory and the bonuses mean the 31-year-old will swop his Italian champion’s jersey for blue race leader’s jersey for the 180.9km final stage on Sunday which finishes with a climb of the Mur de Grammont. Mohoric moved up to second overall, 51s behind.

Victor Campenaerts is third at 53s with Stefan Kung, who started the day in the lead another 14 seconds back.

💥 Another great battle of the Ardennes! Sonny Colbrelli comes out on top after a great solo, he is also the new leader 😎🚲 #BeneluxTour pic.twitter.com/rZv8adJork