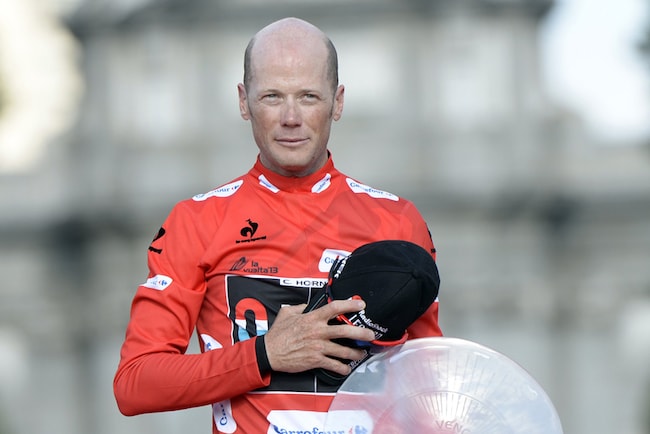 The 2014 Vuelta a Espana winner, Chris Horner, will return to racing Sunday at the US National Championships in Knoxville, Tennessee.

In 2014, the American from Oregon became the oldest Grand Tour winner when he won the Vuelta at 41. After a year with Lampre has since ridden for domestic teams in the US. In the last two years, Horner has suffered from recurring lung problems that have affected his ability to race.

“The doctor originally thought it was a PFO in the heart, which is where a lot of blood jumps from the right side to the left side and bypasses the lungs, so it’s not getting oxygenated,” Horne said.

“So I just spent six months trying to find the PFO leak, but we couldn’t find the leak. Finally, I just said, ‘Let’s just solve whatever this gunk is in my lungs, because we know that’s a problem.'”

“And so they ran a rod down the nose and into the throat. Every 10 seconds you swallow water and they see if it flushes back up. And what they were seeing was that everything I was swallowing was just flushing back up, going into the lungs and causing an infection.

“They started me on the stomach med Pantoprazole. It’s a medicated anti-acid reflux stuff that calms the stomach and the limits the fluids flushing into the lungs.”

Van der Poel: Milano-Sanremo is one of the most difficult races to win