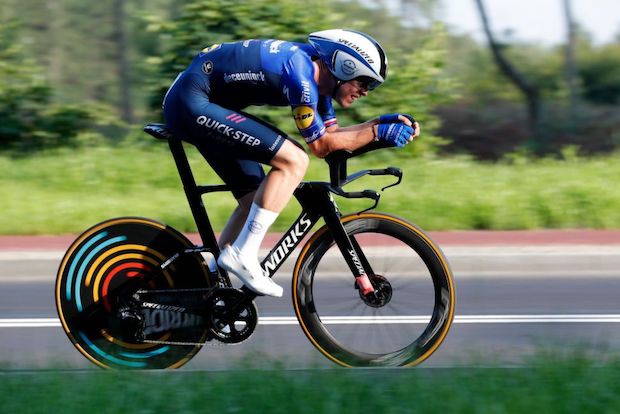 One of the favourites at the start of stage 6, Remi Cavagna confirmed his time trial prowess, putting in a flying ride which saw him record the fastest time in the sole time trial of Tour de Pologne.

The Deceuninck-Quick-Step rider remained in the hot seat until the end of the stage, notching up his third victory of the year, after the ones at the Tour de Romandie and the French Championships.

The only rider who could come close to Cavagna’s time was his teammate, João Almeida. The yellow jersey wearer went fastest through the intermediate checkpoint, but eventually concluded runner-up, 13 seconds behind, a result that cemented his lead in the overall standings and brought him one step closer to the first stage race victory of his career.

“I am really happy with the victory, it was my objective at the Tour de Pologne. A time trial is something I like. It was a perfect distance for me. 20 kilometres is not too long, not too short, you can really make the difference. We are really happy with the team because we finished 1-2,” Cavagna said.

“It was a difficult course with the sun and the wind. I did a good first part because it is important to start really well. I then just kept the power till the end. It was a technical time trial, so I didn’t take any risks in the corners. I saw one of my teammates crash in the last corner. I was a bit scared, so I didn’t take all the risks but it was enough for the victory.”