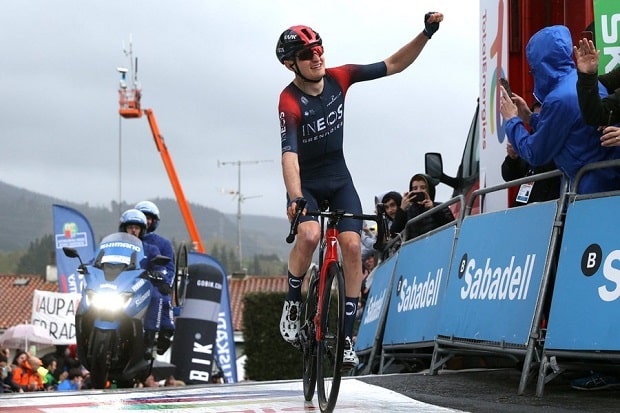 Remco Evenepoel grabbed the overall lead on the Tour of the Basque Country on Friday after finishing third in the fifth and penultimate stage behind Carlos Rodriguez.

Rodriguez was the final survivor of the day’s breakaway, claiming his first professional victory with a solo finish on the final climb, seven seconds clear of Ineos teammate Daniel Martinez.

Evenepoel crossed in third a further two seconds adrift after the 164km stage over rugged terrain from Zamudio to Mallabia which culminated in a slippery climb in wet conditions.

Race leader Primoz Roglic was 1min15s off the pace.

“It happened as we had planned,” insisted Roglic, despite being left behind with a few other leading riders on the last climb, the Alto de Karabieta, 16km from the finish.

Evenepoel has a two-second advantage on Daniel Martinez heading into Saturday’s sixth stage finale which includes seven climbs over a 135.7km run between Eibar and Arrate.