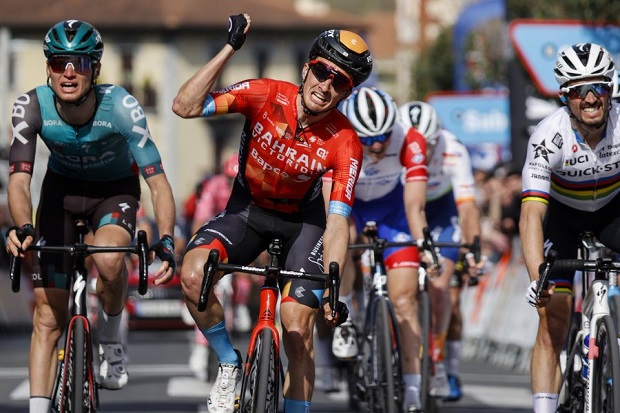 Pello Bilbao gave home fans something to cheer about when his late burst won a hilly third stage of the Tour of the Basque Country on Wednesday.

Primoz Roglic retained the overall lead finishing coolly in the midst of the elite group, who broke from the main peloton on a climb 25km from the finish.

Bilbao overtook world champion and stage two winner Julian Alaphilippe in final metres of an uphill sprint for the line at the end the 181km hilly run to win the stage by half a wheel.

“It’s impossible to describe what its like to win at home, at last, after so many efforts. And then  to do that by beating world champion Julian Alaphilippe in a sprint. It’s just incredible,” said the winner.

“I went just a bit too early, but my legs were hurting so much and Pello was really strong.”

Thursday’s fourth stage is another hilly affair before the two concluding mountain stages of Friday and Saturday.