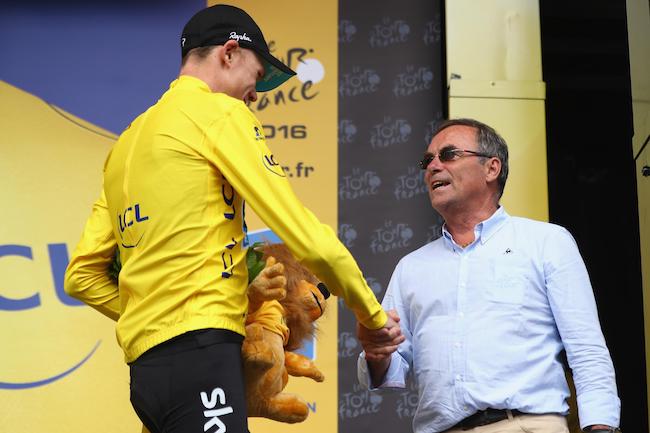 (AFP) – Bernard Hinault says he does not regret calling for riders to strike in protest at Chris Froome’s participation in the race.

Five-time champion Hinault made the call two weeks ago amid the fallout from Froome’s “adverse analytical finding” for the asthma drug salbutamol at last year’s Tour of Spain.

Froome was found to have twice the permissible amount of the drug on his way to winning the title last September.

The Briton then went on to win the 2018 Giro d’Italia, becoming the first man to hold all three Grand Tours at once since Hinault in 1983.

After months of weathering the storm relating to his salbutamol result, Froome was finally cleared to race the Tour de France by the sport’s governing body the International Cycling Union (UCI) last week.

Hinault shot down suggestions he may now be regretting his call for the peloton to strike.

“Regret what I said? Never! Never! All I said was the truth of the matter, and that’s it,” said Hinault.

“If the international authorities don’t sanction him it’s up to the other cyclists to shoulder the responsibility,” Hinault said. “If the racers accept a cheat on the race then that’s their problem!”

Hinault’s comments were labelled “irresponsible and ill-informed” by Team Sky.

Asked if he had had any contact with Team Sky, Hinault said Thursday: “There’s no risk of that happening, no risk at all, and I don’t really feel like it either.”

And he claims “nobody called me to say that what I had said was wrong”, adding: “You have to stand up for yourself in life, they have forgotten that.”

“Once we knew he (Froome) would be at the starting line, he had the same chance of winning as any of the others (the GC favourites),” Hinault said. “There is no real favourite, there are four or five of them.

“Richie Porte was very good last year, and if he hadn’t fallen, who knows? Tom Dumoulin hasn’t shown his hand yet but he is capable of winning it too.

“And look at Movistar with their three (key) riders,” Hinault said of Alejandro Valverde and Mikel Landa, and Nairo Quintana, who has twice finished runner-up to Froome on the Tour. “If they work out how to use the three of them, you could easily envisage a win for them.”

As Froome targets a fourth consecutive yellow jersey and fifth overall, after his maiden triumph in 2013, French hopes lie firmly with Romain Bardet.

A runner-up place in 2016 who also finished third in 2017, Hinault said Bardet’s chances of escaping from Froome and other key contenders were slim.

“Romain has just one chance of winning and that is (making the difference on) the descents, it’s the only place where he is better than the others,” said Hinault. “On the climbs, in the time-trials, they won’t let him go.”