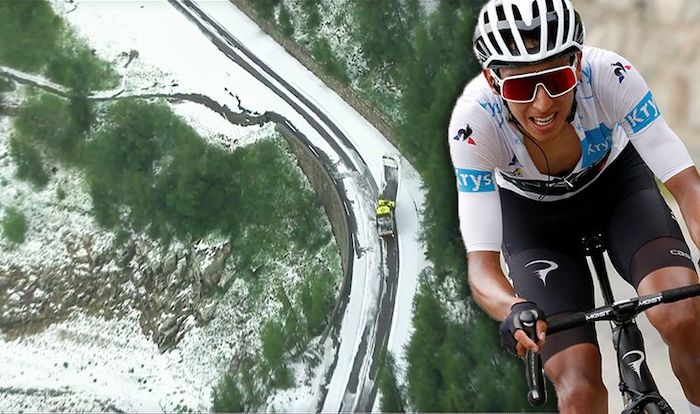 Julian Alaphilippe lost his yellow jersey in exceptional circumstances on Friday as Egan Bernal took control of the Tour de France after organizers made the rare decision to stop Stage 19 in the Alps because of a hailstorm.

Two days before the race ends on the Champs-Elysees, the Colombian pure climber snatched the coveted tunic with a tremendous attack in the punishing climb to the Col de l’Iseran, the Tour’s highest point at 2,770 meters.

Down in the valley, the sudden and violent storm caused a landslide and made the roads too dangerous, leading governing body ASO to stop the race. Tour director Christian Prudhomme immediately announced that times would be taken at the top of the mountain, where Bernal was 2 minutes, 7 seconds faster than Alaphilippe, enough to wipe away the Frenchman’s race lead.

An idea of the conditions out there today. The riders will be going straight to the hotels with Bernal the stage winner and new race leader. #TDF2019 pic.twitter.com/qCa8iHHEye

Bernal was 1:30 behind Alaphilippe at the start of the stage. Ahead of Saturday’s final trek in the Alps, the last competitive stage before a traditional processional ride to Paris, the 22-year-old is now in an ideal position to become the first Colombian to win cycling biggest race.

The sudden storm turned summer into almost winter in just minutes, with a dusting of white covering what had been lush summer pastures of green. The stoppage, as racers were flying through hairpin bends down from the Iseran climb, threw the race into chaos.

TV coverage showed a snowplow trying to clear the road of snowy slush, awash with streams of water and ice, as the riders were speeding toward that section of the stage.

It immediately became clear that the road was unpassable on a bike, and organizers made an on-the-spot decision that the riders’ safety had to come first.

It wasn’t the first time that Alpine weather had thrown Tour organizers’ plans into disarray. At the 1996 Tour, what had been planned as a 190-kilometer stage from Val d’Isere to Sestrieres was slashed to just 46 kilometers because of snow, with both the Iseran and Galibier passes not climbed as planned.

The black storm clouds that violently dumped piles of hail and giant puddles at the foot of the Iseran pass, at Val d’Isere, could be seen looming on the horizon as Bernal went over the top of the climb.

The unprecedented stoppage sent a shockwave through what has been the most exciting Tour in decades. Although Bernal was all smiles as he stepped into an Ineos car, other contenders including Alaphlippe were clearly disappointed. The French rider waved his left arm in disdain and swerved back and forth across the road. Colombian rider Rigoberto Uran looked angry.

But Marc Madiot, the manager of the Groupama-FDJ team, applauded the stoppage.

”Safety is the first priority and the decision to stop the stage seemed to be the only decision to make,” he said. ”Imagine that the race had a continued and a rider had plunged into a ravine.”

Alaphilippe, who wore the yellow jersey for 14 days, said he expected to lose the race lead.

”I gave it all, I don’t have any regret,” he said. ”I’ve been beaten by stronger than me.”