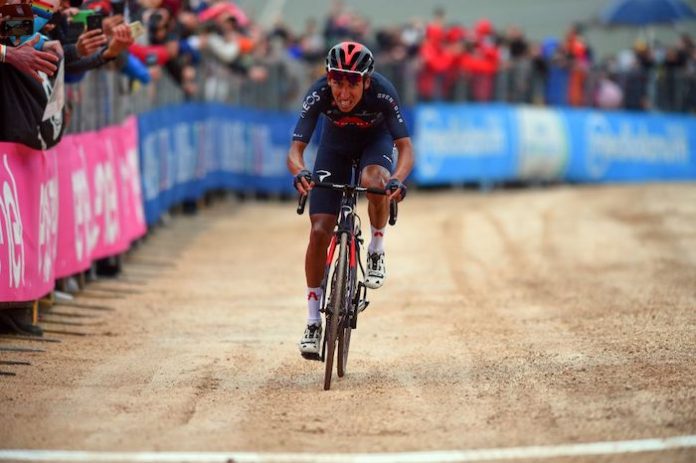 Egan Bernal blew away his rivals on the Giro d’Italia as he won the ninth stage with a brutal, gravity-defying effort in the final climb to claim the race’s overall lead on Sunday.

You can rewatch STAGE 9 of 2021 Giro d’Italia HERE

The 2019 Tour de France champion produced impressive acceleration inside the last km of a gravel road final section to beat Giulio Ciccone and Aleksandr Vlasov, who were second and third respectively seven seconds behind.

Remco Evenepoel, back to competitive racing nine months after sustaining multiple injuries in a crash at the Giro di Lombardia, took fourth place, 10 seconds off the pace.

Bernal, perfectly set up by Gianni Moscon’s infernal pace in the finale, whizzed past Geoffrey Bouchard and Keen Bouwman 300 metres from the line and never looked back.

Ciccone managed to follow but quickly cracked as Bernal flew towards an awe-inspiring victory as Maglia Rosa holder Attila Valter ground away in the background.

“I can’t believe what’s happening,” a tearful Bernal said following his first stage win at a grand tour at the end of the 158-km ride from Castel di Sangro. “I didn’t expect to be here in that position after the Tour last year.”

Overall, Bernal, who has struggled with back pains since abandoning the Tour last year, leads Evenepoel by 15 seconds.

Vlasov is third, 21 seconds off the pace, with Ciccone, who appears to be becoming Trek-Segafredo’s team leader as double champion Vincenzo Nibali continues to struggle, a further 15 seconds back.